Janice Kinory introduced the HEIR (Historic Environment Image Resource) project, which contains digitised historic photographic images from all over the world.  The project has its origins in the need for the Institute of Archaeology to create more space in its premises in Beaumont Street, Oxford.  Numerous crates of lantern slides dating from the 1880s to the 1960s were discovered and these, together with glass plate negatives held in college, library, museum and departmental collections within the University of Oxford, form the core of the resource of 25,000 images.  New images are being added all the time, including collections from outside the University.  These include 35mm slides from 1960s-1990s, currently awaiting digitising. 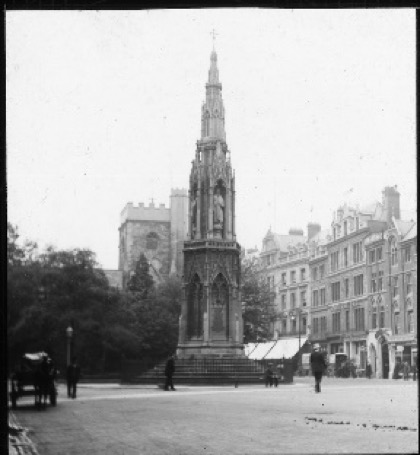 HEIR’s mission is to keyword the images and re-photograph them in their modern settings, so they can be used by researchers from a wide variety of disciplines to track changes to sites, monuments, landscapes and societies over time.

In the past, this material would have been used as an education tool and also serves to remind us of significant events.  Janice showed a photograph of the re-erection of stones at Stonehenge in the 1960s: an event within the audience’s lifetime that would be largely forgotten without the preserved image.

No images of Bicester exist within the collection, but Alchester features in excavations and maps from the 1920s and 30s.

A comparison of ‘then & now’ photos can help us to appreciate the purpose of a structure and how attitudes have changed over time.  A photograph of the Martyrs’ Memorial shows a fence and bench in place until WW2.  The bench gave viewers an opportunity to sit and contemplate the martyrs’ fate, but its removal changed people’s ideas about the memorial’s use. 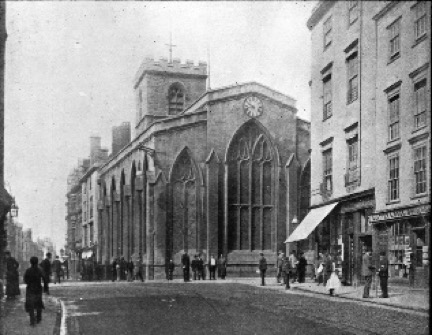 A 19th century photograph of Cartax Tower shows us that it was part of St Martin’s Church, which was the city church up until 1896, when it was demolished to relieve traffic congestion.  This photograph explains the siting of the tower, which would, otherwise, be regarded as rather incongruous.

Changes in transport can be tracked through the archive.  A glimpse of a tram track in a photo of St Mary’s Church in High Street can be dated from no later than 1914, as the need for horses in WW1 meant that the trams were replaced by motorbuses at that time.

The collection includes photographs of Victorian and Edwardian women riding bicycles, which was an usual occurrence prior to Queen Victoria’s adoption of a 4-wheeled ‘bicycle’.

Evidence of flooding in and around Oxford is captured in a series of 19th photographs of Botley Road, Abingdon Road and St Thomas Street.  Aerial photos from 1929 and 1947 show the extent of the devastation.

Janice took us on a pictorial tour of the centre of Oxford, noting architectural details and changes.  She used clues, such as clothing, transport, known dates of buildings and a technique called relative dating (sequencing), to attribute an approximate date where this was unknown.