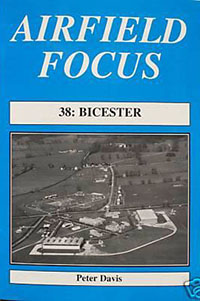 Peter Davis produced a comprehensive survey of RAF Bicester in this book. The aerodrome is unique as it is the best preserved remaining World War II in the country and typified the development of airfields during 1930s. 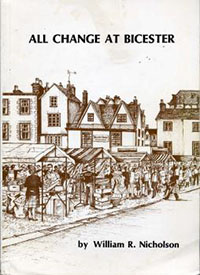 All Change at Bicester

William Nicholson's book covers the post World War II period of Bicester's development over a thirty year timescale until the 1960s. The transformation of the urban landscape is noted as are the changes to the cultural and social fabric of the town. Many of the local clubs and societies are listed in the book and how the membership related to them. This historical account offers an interesting study of the town before the advent of recent development projects. 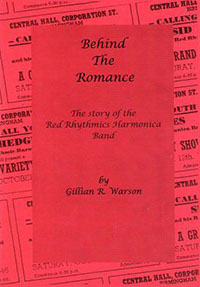 This book charts the story of the popular Red Rhythmics Harmonica Band from 1936 to 1956. The publication highlights the leadership of Sid Hedges in forming and organising the Band and their links with the Methodist Church in Bicester. 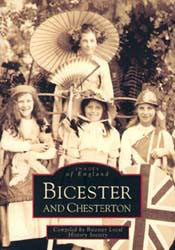 This book represents Bicester Local History Society's first publication. It contains over 200 old photographs providing a glimpse of life in Bicester and Chesterton over the last 100 years. The quieter pace of village life in the last years of the 19th century is also documented. Included within this compilation are images of lively street scenes, sports teams, dramatic productions and special events in the lives of local individuals. The scenes of Bicester have been assembled from small private collections held by local people with a family history in the town. The photographs of Chesterton were rescued from a bonfire several years ago. 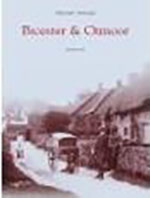 This book, by author Sian Ellis, illustrates the changes that took place in the town from the late twentieth century through a series of pictures that capture the people and events of the time. A large part of the book is devoted to life in the surrounding villages and the rural landscape of the time. This includes a survey of the unique area covered by Otmoor to the south east of the town. 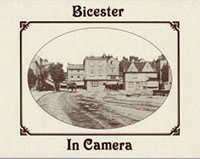 Local photographer Michael Morgan followed his father's footsteps in recording many aspects of the history of the town through a series of unique photographs that capture scenes from Victorian times to the post World War II period. The photographs record people, events and places that were important in the town's development and capture the spirit of times long past. 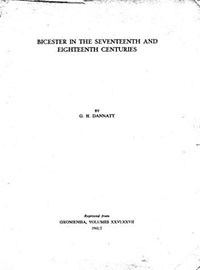 Bicester in the Seventeenth and Eighteenth Centuries

Miss Dannatt's study of wills and inventories, relating to Bicester up to 1857, form a fascinating study of the lives of ordinary residents of the town at the time. The trades and occupations listed shed light on the economic structure of Bicester and the social fabric of the times. 'Bicester in the Seventeenth and Eighteenth Centuries' reveals that many of the residents were the ancestors of families still living in the town today. 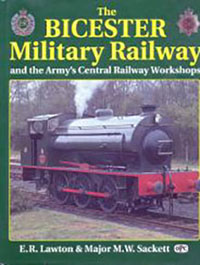 The Bicester Military Railway and the Army's Central Railway Workshop

Hidden away in the Central Ordnance Depot the military railway has performed a vital function in peace and wartime. 'The Bicester Military Railway' reveals its role over the last sixty years. 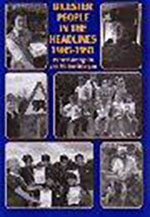 Peter Barrington and Michael Morgan bring elements of local history up to date with this volume charting the story of Bicester people who made news headlines from 1985 to 1991. The collection of articles featured reflect the rapidly changing times the area was going through and the people and events that helped to shape the town as we know it today. 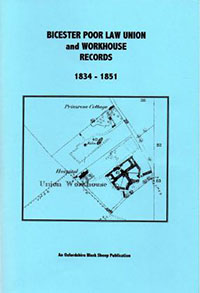 This publication contains just a small part of a large collection of records relating to the Bicester Poor Law Union. Included are the earliest Admission & Discharge Register, Applications for Relief, details of those who were employed at the Workhouse and those individuals who applied for medical benefits. 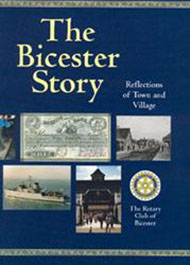 The Rotary Club of Bicester took some time to decide on this book as a worthy edition to celebrate the Millennium. As a group, none profess to be writers but it soon became clear that chronicling events that have affected Bicester and the surrounding area necessitated looking back to early times. So, included here are some articles of an historical nature as well as those more personal stories from local characters and personalities. From the time the Romans settled in the area there has been constant change - never more so than in the late 20th century. This book seeks to bring together these changes in an easily readable style.

Some areas of Bicester have changed very little - for example King's End and Market Square - whereas parts of Sheep Street and North Street are almost unrecognisable. Nearly 80 per cent of the buildings in Market Square and the Causeway are classified as 'buildings of interest' under the English Heritage Listed Buildings scheme and this has given them an element of protection from development. Bicester was, and still is, predominantly a market town serving the needs of not just those who lived in the town but also those from the surrounding villages. Its population remained static at around 3,000 for the hundred years preceding 1920. By 1951 it had only risen to just over 4,000 but, over the last 30 years, this figure has risen to over 30,000 and Bicester has seen a period of considerable growth and development.
Click here to print the order form. 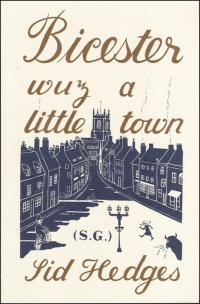 The classic Bicester history text by local author Sid Hedges first published in 1968 and much loved by those born in the town. The book paints a vivid picture of the old town and the memorable characters that lived there from the turn of the twentieth century. A must for those wishing to experience the atmosphere of the small market town before modern developments began. The book identifies different areas of the town and the changes that took place during the author’s lifetime. Now re-published in paperback version, this fascinating historical record of Bicester is a terrific insight into how much Bicester has changed over the years. At a time when Bicester is going through even more dramatic changes, this book is essential reading for people living in or connected to the town. 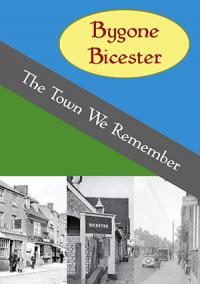 Bygone Bicester: The Town We Remember

The Society's first DVD production followed on from our successful oral history project. It features interviews with various members of the Society, all talking about the Bicester that they grew up in. It covers a wide range of topics from schools and employment, through to transportation and big events. 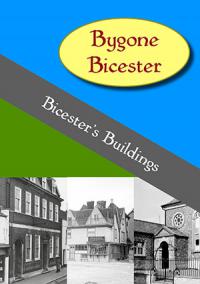 Our second DVD production takes a closer look at some of Bicester's most interesting and underappreciated buildings. Pat Snelson talks us through their key features and historical significance, with a bit of social history thrown in.
Click here to print the order form. 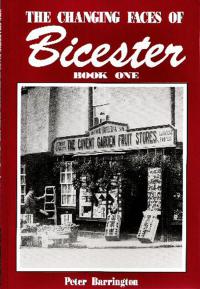 The Changing Faces of Bicester: Book 1

Bicester has changed considerably since the 1939-45 war. From a population of 3,000 in 1931 it has grown to around 24,000 residents. Between the two world wars a town joke was that you could fire a rifle down Sheep Street and not hit anyone. Nowadays most of the street is pedestrianised and is regularly thronged with shoppers. This first book on The Changing Faces of Bicester recalls the shopkeepers in the town and the people who ran the shops and also some of the tradesmen and women. Other aspects of local life depicted are the Ordnance Depot, farming and entertainment. Peter Barrington was chief reporter for the Bicester Advertiser for 20 years and now works on a freelance basis for the newspaper. 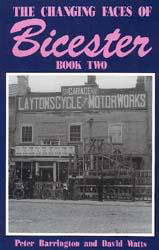 The Changing Faces of Bicester: Book 2

Bicester continues to change. The town's roots go back to the time the Romans left their settlement at Alchester, just south of the town, to move to the slightly higher ground of what is now Bicester. The Augustinian Priory was a major factor in the town's growth and importance. Bicester today is a thriving and expanding community. This second book on The Changing Faces of Bicester explains much of the background to the town and explains why it looks the way it does now. Peter Barrington has been joined by local historian David Watts as co-author. David has worked for the Victoria & Albert Museum in London, and is now with the Bucks Museums, Libraries and Archives service. 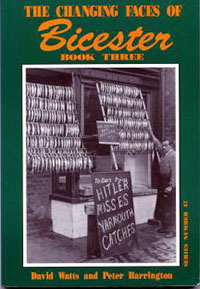 The Changing Faces of Bicester: Book 3

Recent archaeological excavations to the south of Bicester have thrown new light on the importance of Alchester, the Roman town that eventually led to the establishment of Bicester. Crockwell may be a little known area of Bicester to many people in an expanding town today, but played an important part in town life in years gone by. The third book on The Changing Faces of Bicester also features the Bicester and Walden Hill Hunt, the coming of the railways and a host of local people. 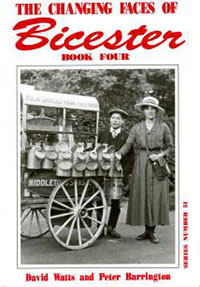 The Changing Faces of Bicester: Book 4

The Blackberry King of Covent Garden is one of the characters featured in the fourth book in The Changing Faces of Bicester series. George Dew, the relieving officer for the Bicester Union Work House and the workhouse itself are recalled along with poet John Drinkwater. Bicester town centre is revisited and there is also a section on North Street and a further report on the archaeological excavations at the Roman settlement of Alchester. 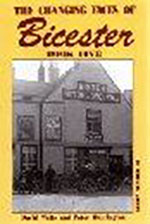 The Changing Faces of Bicester: Book 5

Book Five of The Changing Faces of Bicester returns to Bicester town centre with fresh material and also takes a look at the Highfield area of the town and Slade Farm which has become the Bure Park housing estate. There is also the remarkable story of Bicester's first historian, the Reverend White Kennett. He survived an accidental and serious gunshot wound and went on to become the Bishop of Peterborough. 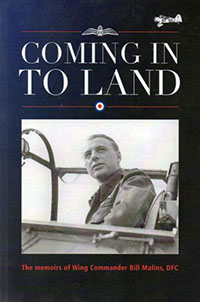 Coming in to Land

The memoirs of Wing Commander Bill Malins D.F.C. provide a fascinating insight into the colourful life of a local resident. His early childhood, growing up on the outskirts of the town at Lords Farm, capture the spirit of the age. Bill Malins served as a pilot during World War II and saw service both in this country and abroad. He eventually left the R.A.F. in the 1950s and resumed his life as a local farmer. 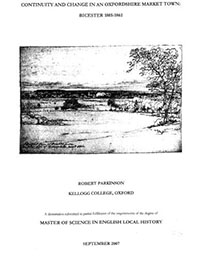 Continuity and Change in an Oxfordshire Market Town

This is an as yet unpublished study written by a former Chairman of Bicester Local History Society, Robert Parkinson. The paper considers the conditions that threatened administrative and economic systems in the area during a period of dramatic change. The reform of the political system at a national and local level and the development of technological innovation impacted on the community and brought about changes in public health provision, fashion, architecture and established institutions of the period. 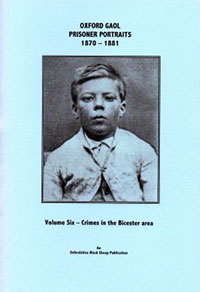 The book investigates the stories behind the images of convicted criminals in the period from 1870 until 1881 and mainly features court hearings held at the Ploughley Petty Sessions in Bicester. In addition to the detail recorded in newspapers of the day, in some cases, the depositions of witness statements made at the Sessions survive and give full testimony from the criminals, witnesses and Police Officers involved. 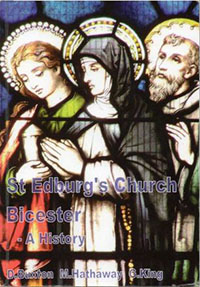 St Edburg's has been Bicester's parish church for over nine hundred years but its roots go back even further. Despite being the oldest building in the area, so much of what is known about it is rumour and conjecture. The book was written as a guide to Bicester's oldest structure. From the Saxon foundations to the Victorian ideals , the Catholic past and the Anglican future, all have shaped the building as we know it today.