The village of Hampton Poyle lies beside the River Cherwell, about 1 mile northeast of Kidlington.

In 1267 Hampton Poyle was granted to Walter de la Poyle. At the time it was called 'Philipeshamton' or 'Hampton Stephani' after its 12th-century lord and his descendants. But it then changed its name to 'Hampton Poyle', 'Poyle' after its new lord and 'Hampton' being the Old English word for a village.

The Church of England parish church of Saint Mary the Virgin dates from the 13th century. The building was restored in 1844 and again in 1870. On the latter occasion it was under the direction of the Gothic Revival architect G.E. Street, who was also involved in the works carried out in St Edburg's Church, Bicester, a few years earlier.

Bartholomew Steer was born in Hampton Poyle in 1568 and went on to lead inhabitants of both Hampton Poyle and Hampton Gay to plot the agrarian revolt, in 1596, against landowners enclosing arable land and turning it into sheep pasture. The rebels planned to murder landowners, including the lord of the manor of Hampton Gay, and then to march on London. But a carpenter at Hampton Gay warned the lord of that manor and the five ringleaders were arrested and taken to London for trial. Steer was tortured and in 1597 two of his co-conspirators were sentenced to be hanged and quartered. However, the Government also recognised the cause of the rebels' grievance and determined that "order should be taken about inclosures... that the poor may be able to live". Parliament duly passed an Act to restore to arable use all lands that had been converted to pasture since the accession of Elizabeth I in 1558.

Manor Farm, the successor to the mansion house called Hampton Poyle Place in 1625, dates from about this time, except for its early 19th-century windows. It is L-shaped in plan and is built of local limestone with a stone band at the first floor on the south. Until 1954 it had a Stonesfield-slate roof. As late as 1949 there were traces in the manor meadow of what were apparently the fishponds of the medieval manor-house.
Between the farm and the Cherwell is the site of the mill. In 1086 Hampton's mill rendered 15s. and it appears constantly in the records until it was burnt down in 1771.

Poyle Court, the Old Manor House, and Knapp's Farm all date in part from the early 17th century, when the manor was sub-divided. Poyle Court retains its L-shaped plan and has two ancient stone stacks on each end gable, but was refronted in about 1800 when a battlemented parapet and wooden casements in gothic style with square stone frames were inserted.

The Old Manor House was formerly called Moat Farm and adjoins 'Moat Cottage', which was its former stable. Its 'moate' is recorded in 1625. Knapp's Farm, built of limestone rubble, was originally rectangular in plan with a staircase projection at the back, but has been refashioned. A part of it was the building bought by Merton College, Oxford, in 1512 as a refuge in time of plague. Lincoln College also took refuge in the village both in 1512 and 1526. 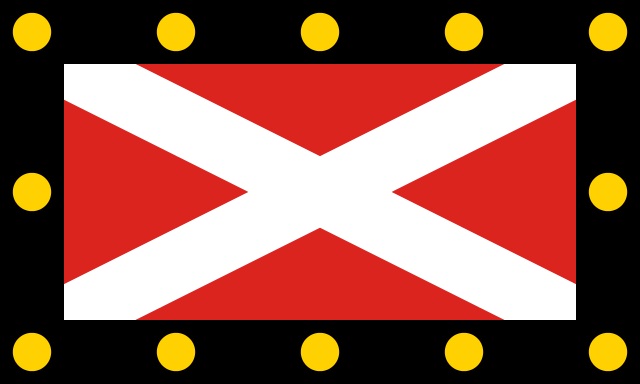 In 2014, the village adopted a flag (pictured) which is registered with the Flag Institute. It is based on the Arms of Walter de la Poyle.