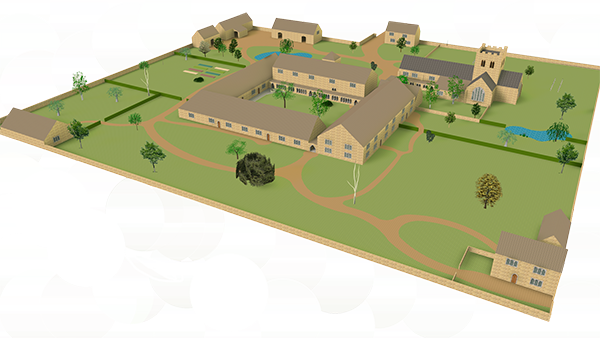 The Augustinian Priory was founded by Gilbert Bassett, grandson of the Gilbert Bassett who extended St Edburgʼs, in around 1183 for a Prior and eleven canons, the number of Christ's disciples. The priory was endowed with land and buildings around the town and in other parishes including 180 acres, two mills and the quarry at Kirtlington, 300 acres at Wretchwick and 135 acres at Stratton Audley, Gravenhill and Arncott. It also held the mill at Clifton and had farms let to tenants at Deddington, Grimsbury, Waddesdon and Fringford. Although these holdings were extensive and close to the market at Bicester, they appear to have been poorly managed and did not produce much income for the Priory.

The land given by Bassett for the priory buildings lay just south of the parish church. The gatehouse was on the site of the former ʻChapter and Verseʼ Guesthouse in Church Lane. The Library, dovecote and houses in Old Place Yard all lie within the central precinct.

The priory church was substantially bigger than the parish church. It was built around 1200, and enlarged around 1300 in association with the construction of the Purbeck marble shrine of St Edburg. This may have been the gift of the prioryʼs patron Hugh de Lacy, Earl of Lincoln. The site of the nave is now partly covered by St Edburgʼs House and the chancel by Bryan House. The priory church was linked by a cloister to a quadrangle containing the refectory, kitchens, dormitory and Priorʼs lodging.

The priory farm buildings lay in the area of the present Church Hall, and these had direct access along Piggy Lane to land in what is now the Kingʼs End Estate. In the south-eastern part of the precinct, in what is now Priory Lane, is thought to have been a hospice or guesthouse. The house now called ʻThe Old Prioryʼ was rebuilt on this site using medieval material. Just north of this is the site of the mill, designed to be driven by a horse walking in a circle around the millstone. The eastern edge of the precinct was bordered by the branches of the Bure stream or ʻTown Brookʼ. The priory watermill lay near the site of the building called ʻ3 The Prioryʼ at the bottom of Chapel Street (formerly Water Lane) and remains of the mill race that fed the waterwheel can be seen in itʼs garden.

In 1243 Bicester Priory made an important contribution to the development of what was to become Oxford University. Allen Bassett made 'the earliest known provision of anything in the nature of a scholarship' when he founded a chantry for two clerks to study. The Priory took a lease from Oseney Abbey of Hastings Tenement in School Street, Oxford until the end of the 15th century. This ʻBicester Schoolʼ was absorbed by St. Mary's Hall, which later became part of Oriel College.

Since the priory was never very rich, it was among the first to be closed. In 1537 the value of its land and property amounted to £176 a year, and following its surrender to the King the priory church was demolished by Sir Simon Harcourt, the Sheriff of Oxfordshire, who 'saved' the shrine of St Edburg and took it to his home parish church of St Michael, in Stanton Harcourt.