The Church of the Immaculate Conception 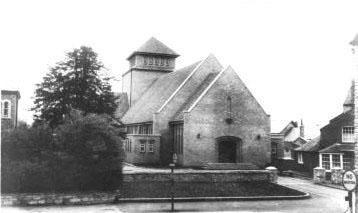 From the closure of the Priory in 1537 until the nineteenth century, there is very little record of Catholicism in Bicester. In 1869, Lord William North, of Wroxton Abbey near Banbury and Master of the Bicester Hunt, made a concerted effort to revive the faith. The first Catholic chapel and school (St Mary’s) for centuries opened in Piggy Lane in 1883 and in the early 20th century, Priory House in Priory Lane (originally founded by Benedictine nuns exiled from France) became the Catholic Church. Finally in the 1960s, Grimshaw’s builder’s yard in Church Street was acquired for a new church. 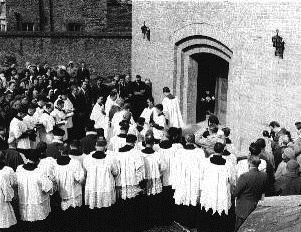 The Church of the Immaculate Conception, designed by Desmond Williams & Associates, was opened by the Archbishop of Birmingham on 23rd March 1963. The final cost of the church was £43,000 with an additional £10,000 for furnishings. 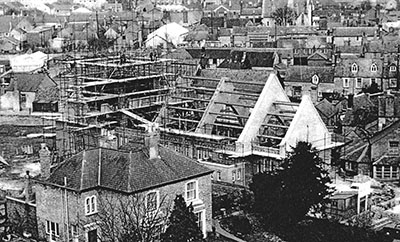 Although it was built at a time when modernist architectural principles and materials were being adopted by many new Catholic churches, this church was deliberately designed to be deferential to its historic context, in particular to the ancient parish church of St Edburg’s less than 100 metres away but over 1000 years older. The outline of the building thus takes its cues from history: it has a central nave, jutting projections either side of the sanctuary which represent transepts, and a central tower. The latter has a pyramidal roof with windows to all sides. Internally the tower is open to the roof line, creating a lantern effect of natural light over the sanctuary area. The building is also constructed from dark blond brick which blends in with the old limestone buildings which surround it. 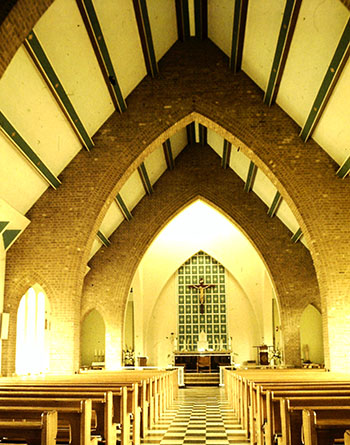 Inside, the design of the church mixes some very old and some very new architectural motifs. The most striking feature of the interior are full height transverse arches – made entirely of rustic brick - which hold up the roof. This design of arch was also used in many Arts and Crafts churches of the late 19th century and mimics the medieval timber cruck structures of the earliest timber churches. At their bases, the arches are pierced with small circulatory openings which hark back to the additional side aisles of ancient medieval churches. The walls between these imposing arches are plastered and plain and incorporate simple tall lancet-style windows which flood the nave with natural light. Plain oak benches complete the effect of a simply organised but reverential space.

In 1993, £40,000 was raised to pay for the bronze statue by Mark Delf of Stafford, above the main entrance. The sanctuary’s marble plinth has been reordered several times and in 2000 a modern stone altar (from Birmingham cathedral), font, seating and pulpit were installed together with modern abstract glass by Jane Campbell in the Blessed Sacrament (north) chapel. A painted crucifixion in Primitive Italian style, by the prior of Farnborough Abbey was installed in place of the former reredos and cruxifix.

In 2005, Father Paul Martin, the parish priest, conceived a plan for a large modern centre to be built next to the church which would serve the whole community. Construction started on the John Paul II Centre in the summer of 2010 and the £1.7m building was officially opened by HRH The Princess Royal in 2011. Designed by Ziggurat Architectural practice, the contemporary building meets ‘Passiv’ design standards – a German standard which means the property requires the minimum of energy to heat and run.