One of the earliest detailed map of Bicester is dated 1753. It is entitled "A New Map of the two Manors call'd Market End, and Kings End, in which are delineated the lands of Sir Edward Turner, and Mr John Pardoe as they are situated in each manor". 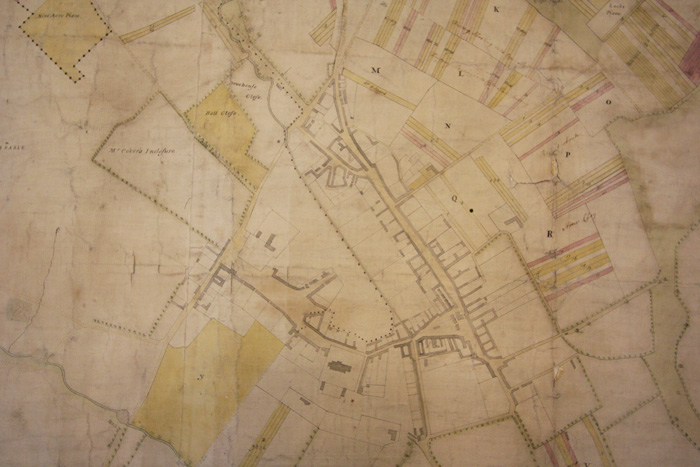 There are two versions in the Oxford County Record Office. Each are annotated with the names of fields and the "strip furlongs" that they contain and their ownership. 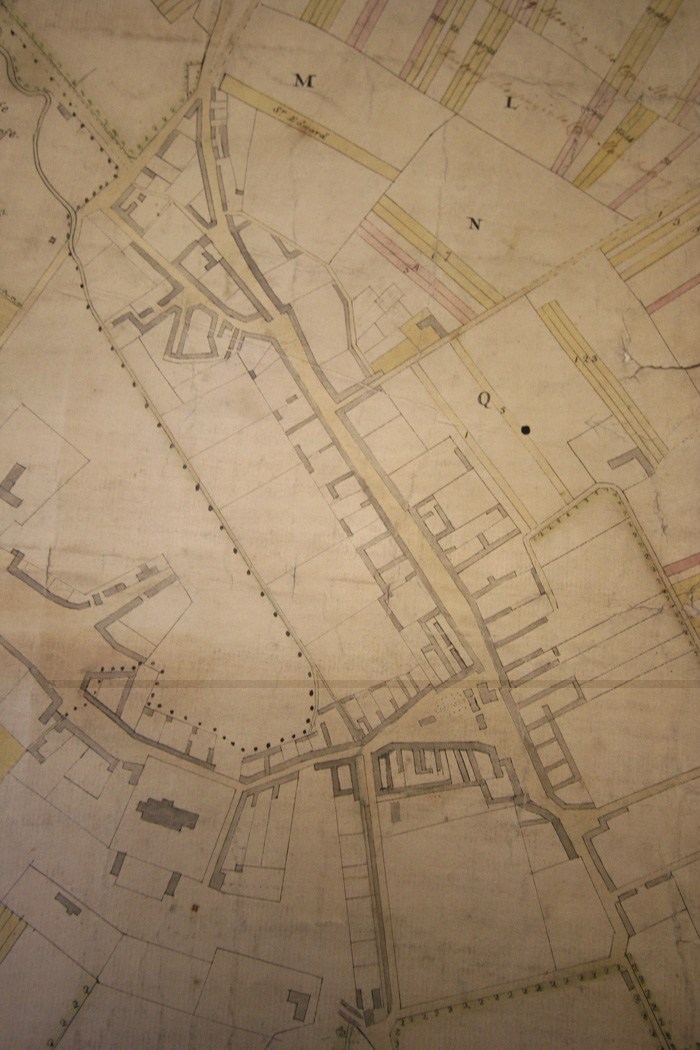 It is one of the few maps that shows the location of The Shambles in Market Square. Note also the buildings that line the edge of the land between Bicester House and Tinkers Lane. These were pulled down when the Cokers from Bicester House wanted to enlarge their garden.

Bryant's map of Oxfordshire, published in 1824 is a forerunner of the Ordnance Survey maps. The two examples here are from the map produced for the Oxford Diocese. 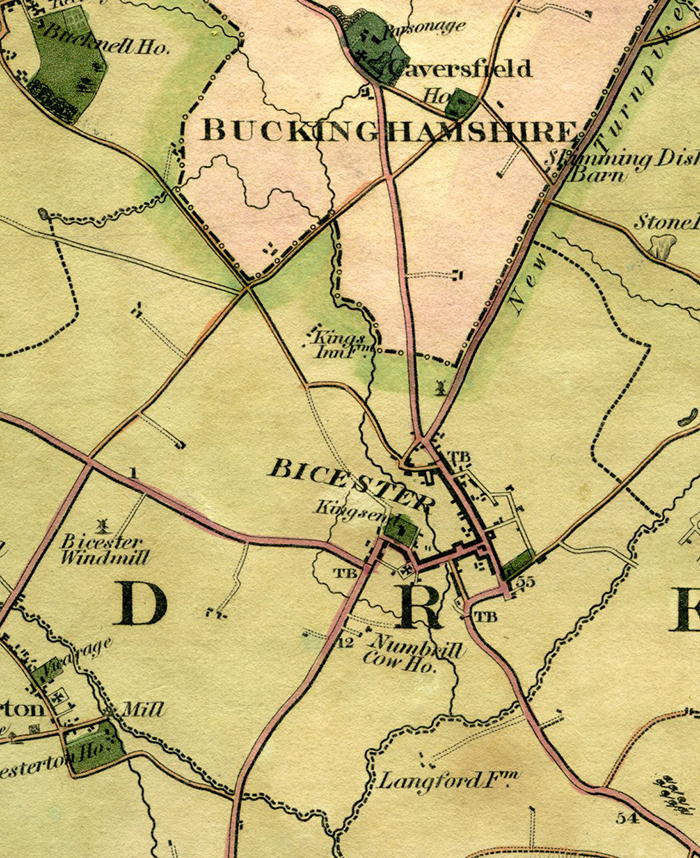 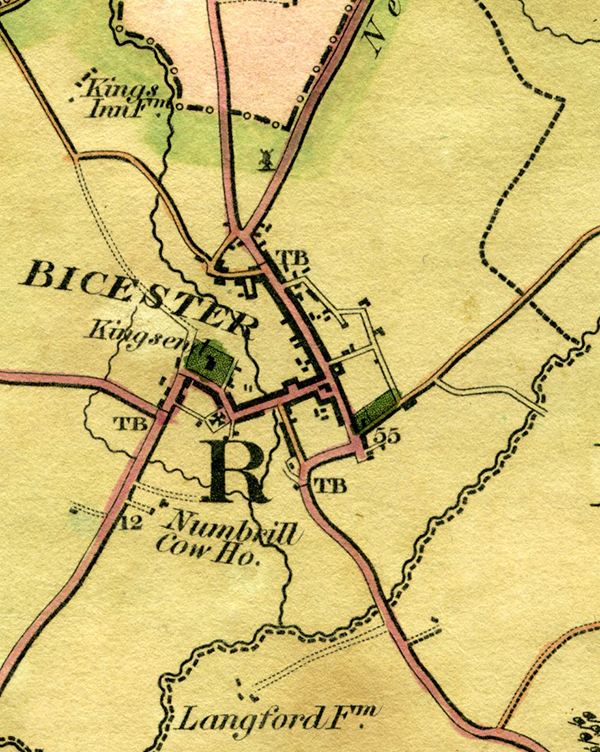 Note that the main thoroughfare from London (Aylesbury) enters the town along what is now known as Priory Road, via the Toll Gate (TB) that was situated close to the current junction of Priory Road and Chapel Street (Water Lane). Water Lane, as it's name implies, was often flooded and the route via Priory Road and then into Market Hill would be more easily negotiable. This probably explains the siting of the coaching inns (King's Arms, Nags Head and Kings Head) as you approach Market Hill.

The first Ordnance Survey maps (1" to 1 mile) were produced in the early 1800s. This one showing Bicester is dated 1833. 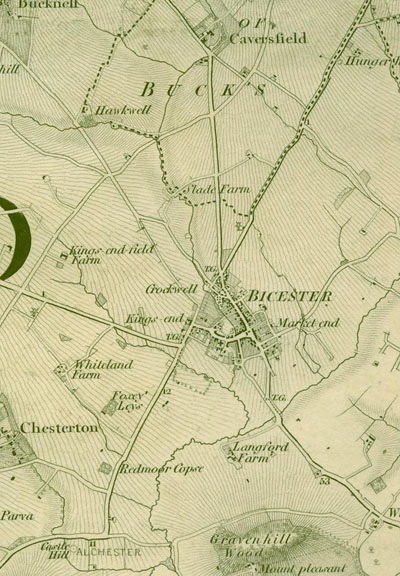 Bicester 1833 - note the windmill on the far left, near the Chesterton - Middleton Stoney cross-roads. There is another one along side the Buckingham Road. Also the initials "T.G." - these are where the toll-gates were and which levied a tax to travellers into the town. Note there are no railways - the first line to be built (from Oxford to Bletchley) didn't open until 1850. 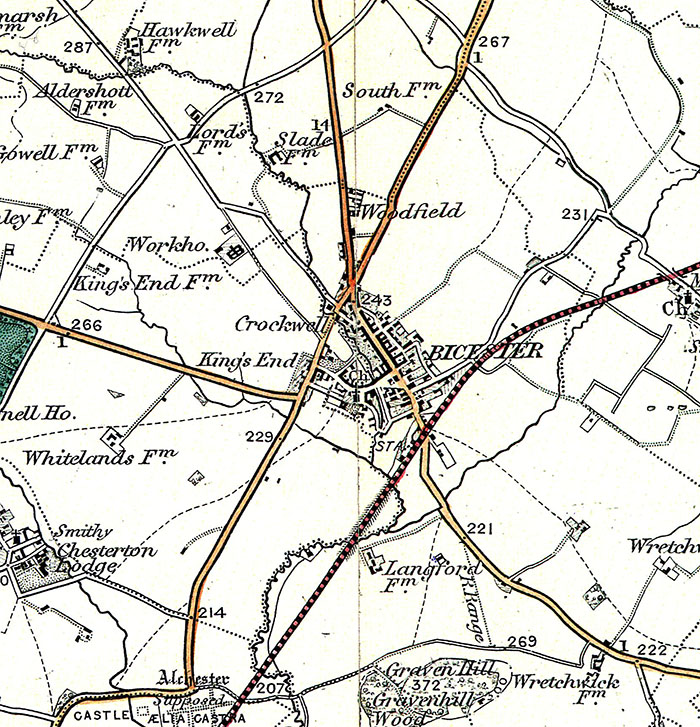 Bicester 1914 - Both railway lines have been built. The road south to Oxford goes close to the site of the Roman town of Alchester before going through Wendlebury village. 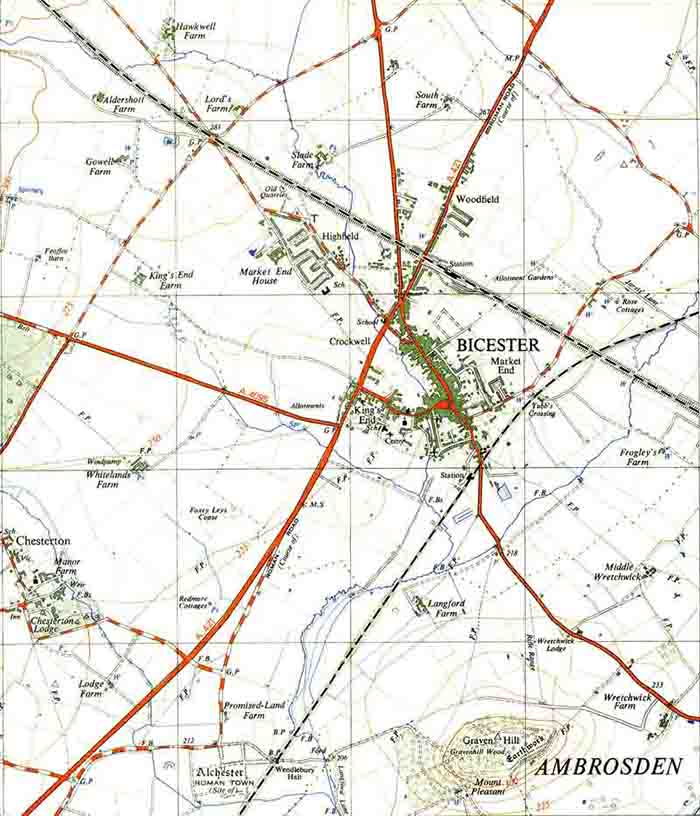 Bicester 1950 - The road to Oxford now takes the straighter route, avoiding Wendlebury. There are signs of development along the Buckingham Rd and Banbury Rd, and the construction of the Highfield Estate is under way. However, the map had not been updated to show the airfield north of the town. 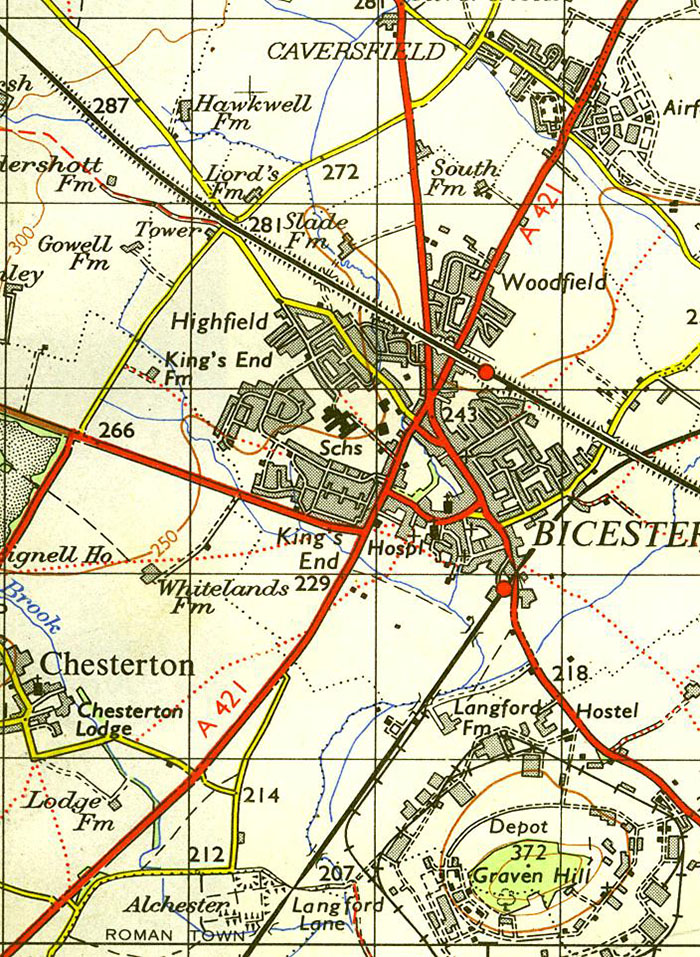 Bicester 1965 - Large scale devlopments are now evident especially in the Kings End area. The airfield is now shown and part of the extensive MOD site, with its own railway, at Arncott. 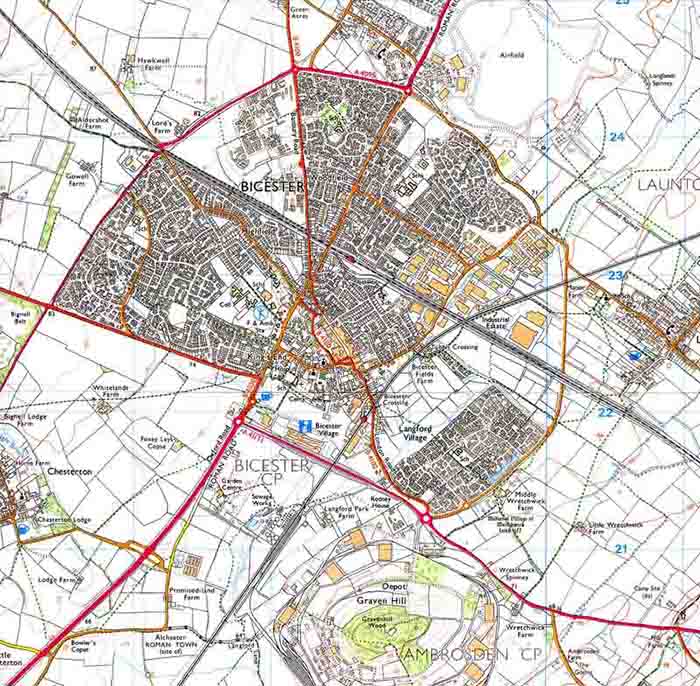 Bicester 1999 - the town is almost surrounded by the new devlopments of Southwold, Langford Village, Glory Farm and Bure Park is partially completed. The new ring road has been completed along with Bicester Village Retail outlet.

The Oxford Record Office has some interesting maps of Bicester (and the surrounding area). For example this is part of the District Valuation map for Bicester from around 1910. 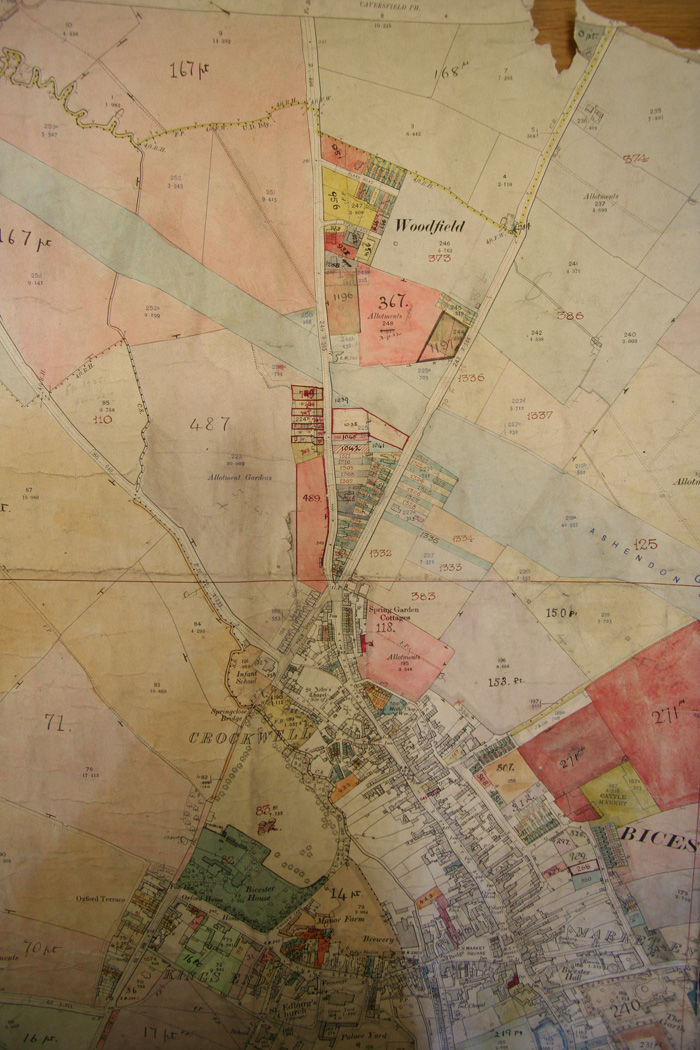 Each property and associated parcels are identified by a number and this corresponds to a number in a log-book (also available in the ORO) which gives information on the occupant of the building and also the owner if the building is let. Towards the top of the above map you can see (in blue) land acquired for the building of the GWR line to Banbury and the larger parcel of land which became the site for Bicester North railway station and associated railway sidings. 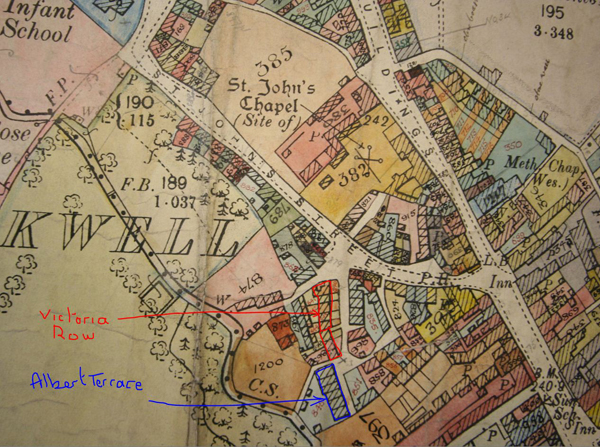