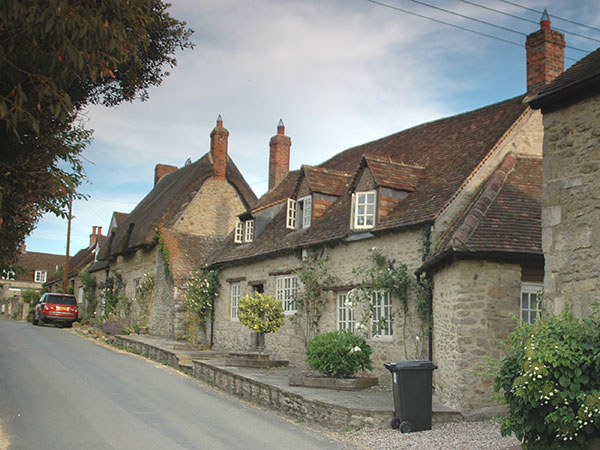 The village of Beckley lies just at the edge of the Society’s area on the south-eastern side of Otmoor.

A former Roman road from Dorchester on Thames to Alchester passes through the village. Part of it is now a bridleway and artefacts found in the 19th century amongst the remains of a Roman villa near the road are now held in the Ashmolean Museum.

In the early Middle Ages Beckley was reputedly the home of a Saxon saint called Domnanuerdh.

Before the Norman Conquest in 1066 the manor of Beckley was one of many that belonged to Wigod of Wallingford. After the conquest the Norman baron Robert D’Oyly married Wigod’s daughter Ealdgyth and thereby acquired all his estates. D’Oyly then gave a number of the manors, including Beckley, to his brother-in-arms Roger D’Ivry.

Beckley remained with Roger’s heirs until early in the 12th century when, by 1156, the D’Ivry estates had passed to Reynold de St.Valery. Reynold died leaving the estates to his son Bernard, who in turn died leaving them to his younger brother, Thomas.

Thomas supported Philip II of France in his wars against England, so by 1197 Richard I seized the de St.Valery estates, including Beckley. But during the 13th century Thomas de St.Valery and his heir by marriage, Robert de Dreux, changed sides a number of times between England and France, forfeiting and regaining their English estates a number of times as a result.

In 1227 Henry III granted the St. Valery estates to his brother Richard, 1st Earl of Cornwall. When Richard’s heir, Edmund, died childless in 1300 his cousin Edward I inherited his estates. From then until 1550 the freehold of Beckley remained with the Crown, with a succession of noblemen appointed keepers or “Parkers” to manage Beckley Park on the King’s behalf.

Under the will of Henry VIII, Beckley manor passed to Princess Elizabeth in March 1550 and in April 1550 Sir Walter Mildmay conveyed it to Sir John Williams, later Baron Williams de Thame. In 1559 Baron Williams died leaving Beckley and Horton to his daughter Margaret and son-in-law Sir Henry Norreys. The manors remained in their family until 1645, when Elizabeth, Baroness Norreys died leaving her estates to her daughter Bridget Wray, Baroness Norreys. When Bridget died in 1657 Beckley passed to her son James Bertie, 5th Baron Norreys, whom Charles II made 1st Earl of Abingdon in 1682. Beckley and Horton remained with the Bertie family until 1919, when Viscount Bertie, son of the 7th Earl of Abingdon, broke up the estate and sold it in small lots.

Bernard of St.Valery had a deer park at Beckley, the earliest known record of which dates from 1176. In 1229 the Earl of Cornwall had the park stocked with deer and a deer-leap built. When the manor reverted to the Crown, Beckley Park became a royal deer park.

Oxford University students were constant poachers in the park. So much so that in 1413 the Crown threatened to deprive the University of its royal privileges.

The Earl of Cornwall had a hunting lodge built near the centre of the park, at the foot of the hill overlooking Otmoor to the north. It was fortified with three concentric, rectangular moats. The lodge no longer stands but its moats survive. After Sir John Williams bought the manor of Beckley he had the present Tudor house built, just outside the moats and adjoining the outermost one. Jacobean panelling was added to the parlour in the 17th century but otherwise the house remains very largely as it was built. It is a Grade I listed building.

The parish church of the Assumption of the Blessed Virgin Mary was originally Norman, but rebuilt in the 14th and 15th centuries. The interior has a number of wall paintings dating from this time, including a Virgin and Child, the weighing of souls, the torments of the damned and Saint Peter, Saint Paul and a Doom.