A Brief History of Bicester

The town of Bicester features in the Domesday Survey of 1086, although recent archaeological evidence confirms that there was a settlement on the site of the present town from early Saxon times. There have been several spellings of the town's name since the Norman Conquest. The earliest Norman settlement began around the two great manors of Bicester and Wretchwick, held by Robert D'Oilly, builder of Oxford Castle. By mediaeval times, King's End Parish and Market End Parish were established townships, and in the 19th Century these became the civil Parishes which comprised the early Urban and Rural District of Bicester. 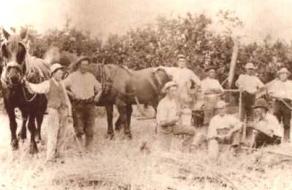 A market was granted in 1239 and through the succeeding centuries Bicester has reflected its dependence on the agricultural area it serves. Sheep Street, the main shopping street, was built 300 years ago to accommodate the animals brought to market. Much of the town's prosperity in the 18th and 19th Centuries was due to local horse races and to the Hunt. There were a large number of inns, not only did the markets provide them with ample custom but also the numerous annual fairs. Local crafts and skills included leather working and saddlery, rope and sack making, basket weaving, straw plaiting, wool combing as well as lace making and brewing.

In the last few decades, much change has come to the town. On the town's outskirts, RAF Bicester was built in 1917, followed later by military establishments and then by increasing numbers of small industrial units. The needs of the rapidly increasing population are reflected in the new shopping precincts and the larger number of retail service outlets.