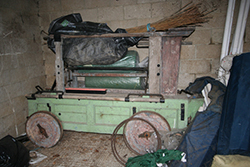 We believe we have unearthed Bicester's first "fire-engine". It was found in 2009 languishing in a storage area of Garth Park. It was under-cover, dry and in remarkably good condition bearing in mind its probable age of over 250 years old! 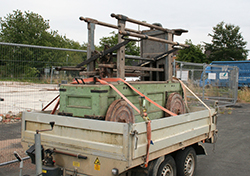 It was manufactured by John Bristow, of Ratcliff Highway in the East End of London, probably around 1730 - 1760.

Following discussions with Bicester Town Council, the fire-engine was removed to a container adjacent to a workshop owned by one of the BLHS members. 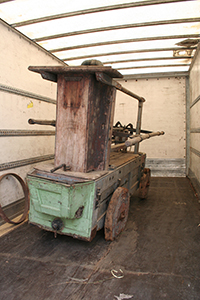 Detailed measurements were made and the following CAD drawing made. 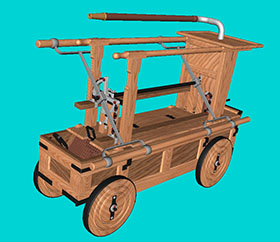 The Oxfordshire Museums Resource Centre at Standlake were contacted and they came and gave valuable advice on our proposed project. We needed to know whether:

The intention is to try and get it back to working order, conserving as much of the original as possible and only replacing with new materials when there is no other option. 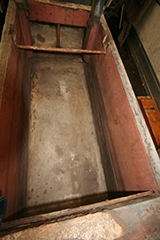 The "reservoir" for holding the water is in good condition. It is partly lead lined but as yet we have not tested it to see if it is water-tight.

The wheels would be a challenge! As you can see from the photograph below, part of the wheel had rotted away. 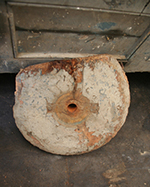 The wheels are made of solid elm and have a metal rim (removed in the picture). We have the facility of turning a new wheel but we will try initially to splice in a new section and keep as much of the original as possible. The other wheels are in a similar condition. 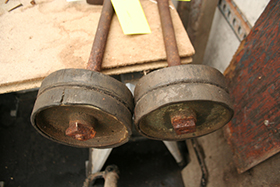 The pumping mechanism has been dismantled to reveal the two pistons and the piston chambers. The valve mechanism (a leather weighted flap appears to be in good order and the leather "piston rings", although worn, still provide a good seal. Research has shown that they would have been lubricated with "Neats foot oil and tallow". Neatsfoot Oil is still commonly used to soften the leather of saddles and bridles - so that is what we used on the piston rings.