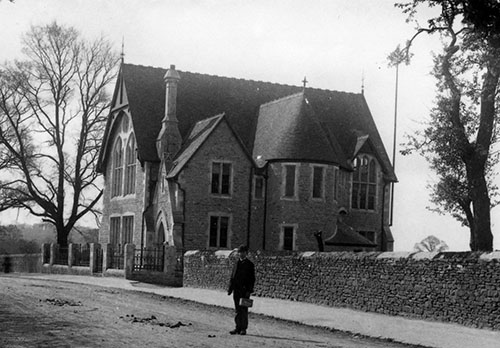 St Edburg’s Hall, Priory Road was designed by Edward George Bruton (1826-1899), a Gothic revival architect who practiced in Oxford. The building, described by Pevsner as being in a ‘coarse and aggressive free Gothic style’ was opened in December 1882. It is packed full of Gothic revival features including three-light lancet windows, pointed arches and gables. It is built from local stone with light-coloured Bath stone dressing.

When the hall was first built, it was surrounded by fields and the site was donated by local auctioneer Jonas Paxton. It was intended as parochial accommodation for the town’s community activities and was the brainchild of Rev. John Blackburne Kane (vicar of Bicester 1881-1894) who masterminded the raising by public subscription of the £1200 needed to build it. Mr Kingerlee – a builder based in Banbury - won the tender to construct it.

Baroness Schroder laid the foundation stone on 14th June 1882, and it remained by far the largest public building in the town for many years. The original interior consisted of a large entrance hall, reading room, lecture room and a large first floor room with gallery and stage capable of seating 400 people. A huge number of events were held here including concerts, magic lantern shows and exhibitions. In the winter of 1896, it acted as a soup kitchen for the poor and needy. In the early 1900s the lecture rooms were being used for woodwork, drawing, cookery and shorthand instruction.

But in the early 1950s the building, by then surrounded by housing and difficult to adapt to modern usage, fell into disrepair and was sold by the Church in 1953. It was later converted into offices for private commercial use.