Dressing Up the Past: Historical Pageants in Early 20th Century Oxfordshire 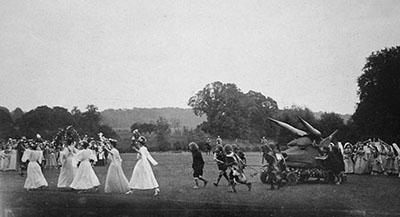 Many of the audience were unaware of how popular pageants were, let alone had come across the expression ‘pageantitis’ the huge craze which gripped the country particularly in the early part of the 20th century. Louis Napolean Parker is attributed to beginning this craze, which involved re-enacting scenes of local history in the places where they took place. Pageants became huge outdoor spectacles, involving hundreds of people. Parker became inundated with requests to write episodes of local history for re-enactment. For the Warwick Pageant in July 1906, a huge grandstand was erected, and Parker would sit in the crow’s nest, directing people over the months and months of rehearsals that took place. Costumes were an integral part of the pageants, with people either making their own or hiring outfits. However, authenticity was always the main goal. Professor Charles Oman went along to see the Warwick pageant, and a plan was hatched to hold a pageant in Oxford. A massive committee was set up: the mayor and the city men took care of the business side, whilst the University advised on the historical aspects. In order to organize and set up the pageant, money was put into a special guaranteed fund. Different ticket prices were devised for seats, and special days were allocated for school children to watch. The pageant took months and months to organize and rehearse, before it finally took place in 1907 in a green field beside the Botantical Gardens in Oxford. There were over 2,700 performers involved, and the actual pageant consisted of 16 episodes of history, and lasted for over 3 hours. The pageant would have been completely scripted, and since there was no amplification, books of words (scripts) were available so the audience could follow what was happening. It was a true organizational feat, with postcards being issued to individuals advising them of the dates and times for their rehearsals. The Oxford pageant was organized by Frank Lascelles from Sibford Gower, and the money raised was given to the Radcliffe hospital.

Pageants proved to be a highly popular leisure time activity in the early 20th century, and were taken very seriously by all those participating.

There was a church pageant in Bicester in June 1914, which took place in the grounds of the Garth. Pageants still continued a little during WW1, and at the end of WW1, there were several peace pageants. Local Women’s Institutes carried on the theme of pageants, and there was a historical pageant in Shipton-on-Cherwell in 1931, devised to unite the old and new areas of Kidlington. There was also a pageant in Banbury in 1911, but instead of telling their own history, they used general episodes of history e.g. the tale of St George, the Romans, and the story of the Boy Scouts.

So what has happened to pageants now? We were informed that the many battle re-enactments which take place around the country today are a form of pageants. And finally, for anyone thinking that they have never seen a pageant, Ellie reminded us of the opening ceremony of the London Olympics in July 2012. This, she assured us, was pure pageantry: a country's history portrayed in short scenes depicting memorable events/achievements; eye-catching costumes; lavish scenery; entertaining music; and highly choreographed performances. And perhaps most important of all, participants showing a great sense of pride and enjoyment in taking part.