A History of Shopping in Bicester

The Meeting was held at The Clifton Centre, Bicester. Sixty members and eleven guests were present at the meeting. Bob Hessian introduced the speaker, Pete Chivers, who related his subject to the forthcoming opening of the new Bicester town centre and the effect it would have on retail opportunities in the town. The history of retail opportunity in the town often reflected national trends.

Little shopping was necessary when the town was founded in Saxon times as people were self-sufficient and grew and made what they needed. Shopping opportunities developed during the medieval period when a market was established. Stalls were located in the present Market Square. The development of Bicester Priory gave a large boost to the local economy. The stalls became more permanent fixtures and shops and workshops began to appear. A Market Charter was granted in 1239. Fairs were held from 1252 when the feast of St Edburg was celebrated annually.

The rural nature of the surrounding countryside saw livestock markets develop based mainly in Sheep Street. This situation continued until a purpose built market was opened in Victoria Road in 1910. The Sheep Market at King’s End was a major event in the area for many centuries. 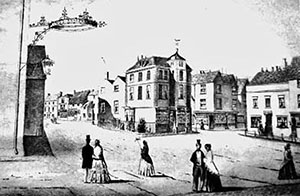 Some of the first medieval shops developed in the Island Block between the Market Square and Market Hill. The Shambles building was constructed in the C17th on the site of the present Market Square car park. Sheep Street grew in importance with refreshment premises and shops developing from C18th. 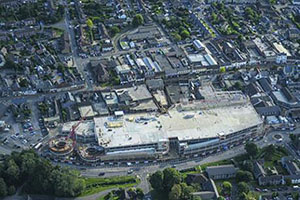 Despite the relative decline in the retail outlook in the town, new investment with the Sainsbury’s development, new shops moving into the town centre and improved transport access have sparked a regeneration of the town centre thus leading to an optimism that the situation is improving. The largest retail revolution in town centre’s history is about to take place. It will be of interest to see how this impacts on the future of the town and on retailing in particular.

Pete concluded his talk by answering questions about the retail history of the town. The Meeting closed at 9.14 p.m.