The Meeting was held at The Pop-In Centre, Crown Walk, Bicester. Present were forty four members of the Society and four guests. Bob was pleased to introduce a return visit from Martin Way who had provided excellent illustrated talks for the Society on past occasions.

Martin quickly gained everyone’s attention with a blast on his Saxon cow horn to emphasis he was a peaceful visitor. The term ‘The Dark Ages’ evolved in Victorian times. Little written evidence survived about the period hence it was assumed that it was a time of limited culture. The period stretched from the departure of the Roman Legions in 410 AD to the Norman Conquest in 1066 AD Evidence of Saxon settlement exists in the variety of local place names that can be traced to this period and the physical layout of many of the ancient settlements in Oxfordshire.

Martin explained aspects of the C6th Saxon costume he was modelling!! The decorated horn, shield, helmet, cloak, Thor’s hammer pendant, sword, spear, dagger, woollen tunic and footwear were all made from natural products. The use of symbols relating to mythology often formed part of the decorative motive used at the time. 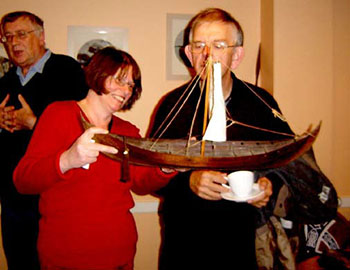 Martin illustrated his talk with a series of slides. The Saxons often came as settlers rather than invaders. They had established a trading centre at Dorchester on Thames some one hundred years before the Roman Legions departed and were employed as mercenaries after 410 A.D. We can understand early Saxon settlement patterns by visits to reconstructed Saxon villages, such as the one at West Stow in Suffolk. Administrative and social structure carried on following the Roman pattern long after the Legions left. Links were maintained with the old Empire. The Saxon influence increased as the population began to embrace different values, beliefs and attitudes brought by the settlers in terms of using natural materials and living in harmony with the world around them. The Saxons were well aware of Roman technology but chose to utilise timber and other natural materials in their life style. The poor quality of Saxon pottery provides illustration of this although the metal work that was produced in the swords and jewellery of the time are of the highest quality. 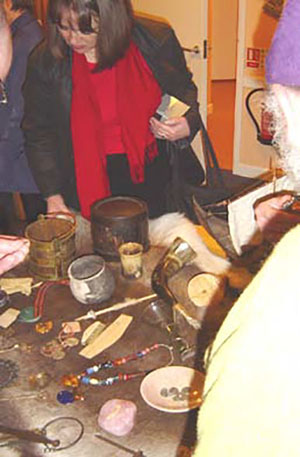 Evidence of Saxon life style is limited as archaeological remains have failed to survive, wooden structures decaying and all but a few Saxon stone churches surviving. Feasting Halls often formed a centre for larger settlements where bards continued an oral tradition of passing on news and mead was drunk. The Sutton Hoo ship burials and mounds illustrate the craftsmanship of the Saxon artisans. The ‘Alfred Jewel’ and the Minster Lovell Jewel are further examples of the richness of craftwork from the period found in Oxfordshire. The richly illustrated Gospels are also worthy of note.

The increasing prosperity of the Saxon kingdoms attracted the Viking invasions from 780 A.D. Examples of Viking culture exist of decorated stone crosses, whalebone carving and runes.

Martin displayed a number of artefacts he had acquired that illustrated aspects of Saxon life. These included weapons, jewellery, pottery, talisman, glassware, drinking horns and coinage. Martin responded to questions posed by the audience.