Beyond Bicester - Mesolithic to MoD

Bicester Local History Society was pleased to host ‘The Oxfordshire Past Conference 2006’ at the Courtyard Centre, Launton Road, Bicester this year. Over seventy delegates attended the event. Extracts from Paul Smith’s (County Archaeologist) and John Moore’s lecture concerning recent archaeological discoveries in Bicester are recorded below. 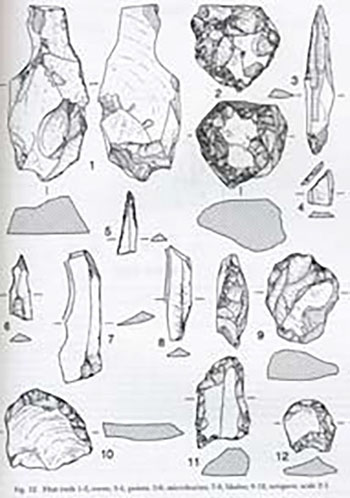 There was little systematic archaeology recorded in the town until some fifteen years ago when much needed legislation required that archaeological sites be surveyed before they were developed. This has provided valuable evidence relating to the evolution of Bicester town and the surrounding region.

The South Farm Roman Complex was recorded by Michael Holloway in 1988, before legislation was enacted. This important villa/temple was severely damaged by building development at the time and little could be done to protect the valuable and sensitive site. The outlines of six buildings and a metalled road surface were observed. Finds from C1st, C2nd and C4th including jewellery, coins, spearheads and a Germanic belt buckle were recovered. The archaeological interpretation of the observations made rated only four paragraphs in the South Midlands Archaeology Journal. The high status site may have included religious and administrative functions.

Early evidence of a post glacial period in the Bicester area has been located, dating from 12000 B.C., illustrating the genesis of the present river system, the River Bure and its tributaries, cutting channels through a semi frozen, open Tundra landscape. Recent archaeological evidence, located in trial trenches at the western end of the Bure Place Car Park, shows channels cut into the cornbrash geological deposits but no organic remains. Triangular stones confirm that ice and water erosion took place in a complex of braided river channels that provided seasonal overflow for the melting ice until the system silted up. The channels provided drainage for floodwaters from the limestone plateau onto the clay of the Oxford Vale.

Some 8000 years ago the climate had significantly changed and the Tundra landscape had disappeared to be replaced by birch woodland on the limestone plateau and denser birch and pine forest on the clay. Marshland habitat was found along the river systems and floodplains of the River Ray. The first recorded inhabitants of the area were Mesolithic hunter gathers. The rich and varied landscape was ideal for these first settlers as it provided a diverse range of resources for them. The early Mesolithic settlers have been detected at Slade Farm (the Bure Park Estate) where concentrations of flint work were located by The Birmingham Archaeology Unit in 1996. The site represented a seasonal hunting camp dating from 8000 – 7000 BC.

Little evidence of the Neolithic Period, from 4300 BC to 2100 BC, is to be found in the area. There are few significant finds and this period requires further research.

The Bronze Age, from 2100 BC to 750 BC, reveals traces of ploughed out barrow features but much has been destroyed. Ring ditches have been identified on Whitelands Farm and in N.E. Bicester. The barrows were placed at the junction of the limestone and clay geology where the land dropped away and so would have been a prominent landscape feature in these positions. There is little evidence of land management systems from this period.

Late Bronze Age to Early Iron Age archaeology (Birmingham University Archaeological Unit 1996) was excavated on the Slade Farm site. A long, linear, cut boundary ditch feature defined dwellings and economic activity to the west but little archaeology to the east. A bronze Halstadt razor find suggests ritual use for some structures built on the boundary. There was a livestock based economy.

Late Iron Age remains, 1st century BC to 1st century AD, at the Bicester Fields Farm site (Oxford Archaeological Unit) revealed a complex enclosure site lasting only a hundred years in total. An enclosed round house with stack gullies and animal skeletons, remains of important meals or boundary markers, were excavated. Evidence points to a stock rearing economy with better quality animals being produced in this period. The wealth of the site is illustrated by traded goods from far a field such as salt briquettes from Droitwich, Worcestershire and sandstone grinding querns from May’s Hill in Gloucestershire.

Evidence of the Early Roman Period, from 1st century to 2nd century, was found in 1994 at Bicester Retail Village. Several phases of ditch digging were identified with building structures containing floor levels. Water channels of the River Bure were silted up over the period, aided by wetter climatic conditions. There was limited evidence of industrial use on the site with a copper alloy bull’s head find.

West of the Oxford Road, a 1st/2nd century farmstead with track ways and post holes was identified. A plate broach from the period was recovered.

At the Bicester Park Industrial Estate several phases of development throughout the Roman Period were detected including track ways, ditches and stock enclosures. Climate change determined land use in the later development of the site with stock rearing gaining in importance from the 3rd century AD. An important find recovered was a fragment of a wax writing tablet, a possible legal document or lease.

First indications of the Saxons founding Bicester were excavated at Saxon Court, Chapel Street by Wessex Archaeology in 1999. Sunken floor buildings dating from 5th – 7th centuries were uncovered. Their use was uncertain and they were scattered over the site. Finds included bone needles and fired clay loom weights within the three structures investigated. Larger Hall buildings dating from the 10th – 11th centuries confirm the early urban development of the town. These probably had links with the Minster Church. The Halls had two main entrances, one for people and another for the livestock.

On the western side of Chapel Street a ditch was located adjacent to the Saxon settlement. This was associated with flood management measures. A gaming piece or counter was found in the ditch.

There is no indication of the original Saxon Minster itself but a large cemetery north of the Catholic Church Car Park revealed in 2000 was undoubtedly associated with the site. Minsters served as central burial grounds for their area in earlier times.

Proctor’s Yard, adjacent to The Causeway, indicated the location of the Minister Church boundary ditch. Further study of adjoining sites revealed waste pits at Vine Cottages in 2004 – 2005. Horticulture was practiced on the site during the 12th – mid 13th centuries. Boundary ditches were cut during the late 13th century. There is evidence of the ground level being raised in the 17th century.

The early medieval development of the town appears to indicate expansion in The Saxon Court area where stock enclosures have been detected. Recent excavations at Rose Cottage, London Road have indicated medieval buildings with floors and drains. The burgage plots forming the historical core of Sheep Street were developed in the late medieval period as dating evidence and lack of early rubbish pits would indicate. A medieval, isolated farmstead building was located in trial trenches in the Wesley Lane Car Park area which also indicates later medieval development in Sheep Street.

The listing of structures at Bicester Airfield as an important World War II heritage site with some of the finest remaining preserved hangers and airfield buildings in the country demonstrates that historical heritage is important from the modern era as well as the distant past. 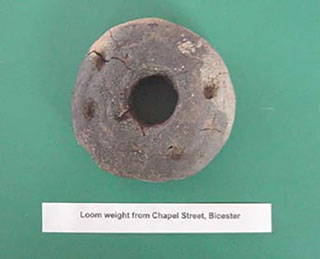