The Meeting was held at the Clifton Centre, with fifty-three members and five visitors attending.
Bob Hessian introduced the speaker, Pat Snelson, who gave an excellent presentation, taking us on a historical journey of the town through its buildings.

Pat began with basic information about bricks, that they require little maintenance and have been made since Roman times. However, they were slow and costly to make and before railways there was no easy way of transporting them, so they were expensive. As Bicester is in a limestone area, that was what our town was mainly built from, although there were a number of stone walls.

Pat spoke of Bicester Priory having had a quarry in Kidlington (Akeman Street) of grey oolitic limestone. Other quarries were at Crockwell and Caversfield. Colours can be grey, yellow or ginger. 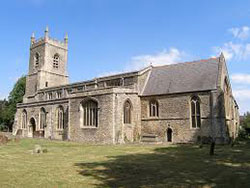 St. Edburg’s Parish Church, the only grade one listed building in the town, is a prestigious building but built of rubble. When the south aisle was added it was more worked and dressed, and when the West Tower was built they used squared stone but smaller. The type of stone used gives us an insight into the development of the Church. 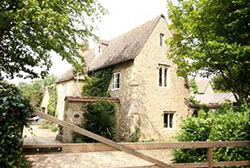 The Old Priory was built from grey stone sourced from the Priory after its destruction around 1547. Old Place Yard House built between 1550 and 1580 using side-grey oolitic limestone, again built from rubble of the Priory.

Pat showed how buildings like 3 King’s End (Lisseters) and Stowe House had different stone on the top floor to what was below. Where original cottages, which had been single story, had been built up. She pointed out examples of corners, which are difficult with limestone rubble.

The type of stone used reflected the wealth of the people who built them. The Hermitage in London Road, for example, was built from good ginger stone and had been well worked. The house next to the Congregational Chapel in Chapel Street was the same. 5-7 Field Street, next door to the Plough, were built from big rubble stone. Huge skill would have been required for the different sized stones. 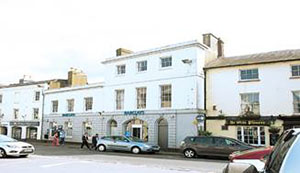 By the 1800’s people were becoming more aware of what their houses looked like. John Nash, a friend of the Prince Regent, introduced stucco facades. Examples can be seen in the Market Square and Sheep Street. Pat drew attention to Edinburgh Woollen Mill, Bean Around The World, and Barclay’s Bank. 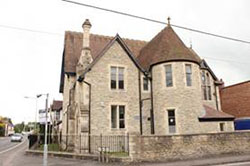 Victorian ‘statement’ limestone was used for St. Edburg’s School, the County Courthouse and St. Edburg’s Hall as they were buildings with important functions that needed to last. She drew attention to the contrast between the old Police House opposite the Church, built with rough stone, and the Courthouse next door, which had more reserved architecture. 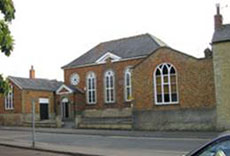 The earliest bricks used in Bicester were on farms and then chimney stacks (bricks are more fire-resistant than limestone) and as decorative lintels. Blackthorn, Horton-cum-Studley and Brill were all major brick makers. There have been three types of Brick Bonds – the English Bond, 14th to 17th centuries, Flemish Bond, 18th to 20th centuries, and Stretcher Bond, 1930’s to date. Flemish is the first we see in Bicester, in the Congregational Chapel. The central part of the chapel is older than the wings. There is chequered brickwork at the rear of Wadley’s old shop and Claremont House. The Courtyard, a late Victorian building, is English Bond, as is Bicester North Station. The Garth, however, was built with cheap Flemish Bond. Modern houses on Southwold are in Stretcher Bond.

Pat summed up by stating that you can see by its buildings that Bicester has never been a wealthy town. She took questions from the floor, and then Bob thanked her for her interesting and entertaining talk.