In these contemporary times when the subject of women’s equality of opportunities and rights is high on the social agenda, it was enlightening to be given a historical perspective by Rowena Archer in her talk on Medieval Women.

The talk concentrated on the dichotomy which existed in the Middle Ages between women of rank and those from the poorer sections of society, the contrasting influences on their positions in social structures at this time and the gradual erosion of the fixed expectation of women. 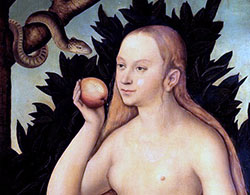 The theoretical basis for hierarchical attitudes to women was derived from Western Christian sources, i.e. Genesis and the myth of Eve, the concept of Original Sin, and the monopoly by the church of teachings about the afterlife. The contemporary stereotypes attributed to women were those of the seductress, weakness and fickleness. Eve’s succumbing to temptation led to Man’s eviction from Paradise and Death entering the world. God’s punishment was for women to become subjects of their husbands and to suffer toil and childbirth. They should not teach, preach, or even talk in Church. In the 12th Century the cult of the Virgin Mary took hold. She has humility and accepts her destiny. The view of women’s role was shaped by texts written by ecclesiastical men who had taken the vow of celibacy since the 11th Century. Women were mostly illiterate so were unable to question these dictates.

Women who were unmarried and under 21 were subjects of their fathers: married women were subjects of their husbands. The ages of consent at this time were 12 for girls and 14 for boys, resulting in remarriage being common, but they were still expected to obey their parents. Women could not own land, be witnesses, make wills or contracts, and Cannon Law allowed for wife-beating. At this time both Cannon and Civil law reinforced women’s position so that women under 21 had no legal status. 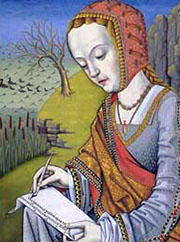 In practice however, for women to cope with the demands of secular life some of these rules and expected norms of behaviour had to be relaxed. In some exceptional cases hierarchy cut across patriarchy so that, for instance, the Queen governed a male Council. In addition, higher ranking women instructed servants and townswomen often had apprentices under their command. The lower orders were mostly involved in the management of the home, growing of food, securing seasonal labour and being responsible for many everyday tasks, including the rearing of children. 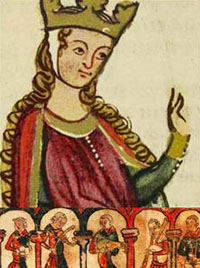 During the heyday of the Crusades, womenfolk at many levels of society were instrumental in keeping the country functioning, dominating the cloth trade, for instance. The regency of a queen was a practical solution to ruling the country when the king was absent. In the 12th century, Eleanor of Aquitaine raised a ransom for Richard II’s return from a Crusade. Queens exercised a great deal of authority on occasions and had particular influence over husbands and sons.

In England, the law was mitigated to give widows over 21 parity with men such that they had expanding entitlements. They could inherit their parents’ land, and Magna Carta already awarded them a third of their deceased husband’s estate. In addition, in the 14th century a jointure could be set up at marriage which was a contract which settled a man’s property on a wife to be enjoyed after his death.

We were given several instances of women who benefited from these revisions, and a prime example was Alice Chaucer (the granddaughter of Geoffrey Chaucer) who through a process of several marriages and inheritances accumulated great wealth with which she purchased a lot of Oxfordshire land. She built a palace at Ewelme in the 15th Century (which survived until the 18th Century) along with almshouses and a school which supplied scholars to Oxford University. The latter buildings and her alabaster tomb can be visited at Ewelme. Upward social mobility for women had improved such that Alice was able to be born a commoner and die with the status of a Duchess.