The Meeting was held at St Edburg’s Church Hall, Bicester. Forty five members and five guests were present at the meeting. Bob Hessian introduced the speaker, Paul Smith, who had recently retired from the post of Oxfordshire County Archaeologist after nearly twenty year’s service. 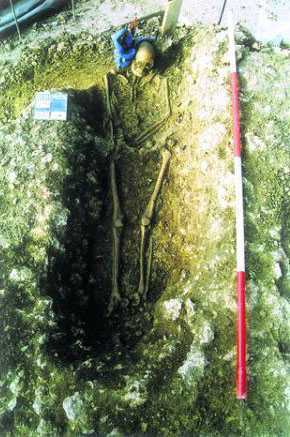 Paul introduced his talk by explaining some of the legislation and complexities that affected the pursuit of archaeology on many sites throughout the country. He proceeded to identify a number of recent excavations in the Bicester area and how they had increased our knowledge of local history in this part of Oxfordshire.

The South West Bicester development (Wessex Archaeology) had added to our understanding of the Bronze Age and Iron Age activity in the local landscape. Significant finds had revealed a ‘Beaker’ burial and an Iron Age enclosure. Roman British finds confirmed that the development area had important links to the nearby Roman settlement of Alchester. It was hoped that isotope tests carried out on human skeletal remains would reveal whether the earliest settlers were indigenous to the area or from further afield.

The Langford Park Farm study (Thames Valley Archaeological Services) that had taken place in 2010. Trenches excavated had discovered a shard from the rim of a rare Saxon St Neot’s type dish of the C10th or C11th and several Romano British pottery pieces. Finds dating later than the C2nd were not found suggesting the site was prone to flooding and therefore eventually proved unsuitable for human habitation. One trench revealed twelve pieces of opus signinum, a type of early concrete flooring suggesting a building was located nearby. A part of a floor tile, animal bones fired clay and a bracelet fragment was also discovered, all of which were indicators of low status settlement in the area.

Further east, on the edge of Graven Hill (Archaeological Services Ltd), a number of possible Iron Age round houses were located using geophysical surveys in 2010. 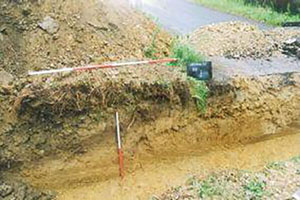 An excavation, made possible by the temporary closure of the Wendlebury Road north of Promised Land Farm (Thames Valley Archaeological Services), sought to discover the actual route taken by the Roman road from Alchester to Towcester. The dig revealed the original road surface and pottery fragments, iron nails and a tegular roof tile dating from the C3rd and C4th. The majority of the pottery shards were locally produced and were of the Oxford and Harrold type. The major conclusion reached following the excavation was that the old Roman road was not aligned its modern counterpart. Modern aerial photographic techniques indicated that the extramural settlement associated with the town of Alchester spread considerably further to the east than had been previously realised.

Recent excavations associated with the redevelopment of the Catholic Church facilities in Bicester confirmed the existence of a large Anglo Saxon Minster cemetery beneath the Church Car Park. Eight skeletons were exhumed of which seven were female. Of interest was the alignment of the graves which appeared to follow ancient boundary lines and were not the true east to west orientations associated with Christian burials. The redevelopment of Bryan House in Chapel Street has provided an opportunity to examine archaeology associated with Bicester Priory. The location of the Priory Church Chancel was confirmed. Floor tiles revealed that the Priory was not wealthy and probably used second hand building materials in its construction.

Bob thanked the speaker for an informative talk that brought our understanding of local archaeology up to date. Paul answered questions from the audience. The meeting closed at 9:04 pm.