Where is the Mediaeval Blacksmith?

The Meeting was held at The Clifton Centre, Bicester. Sixty three members were present at the meeting. Pete Chivers introduced the speaker, Gwyl Williams, who provided an insight into the life and times of the mediaeval blacksmith. 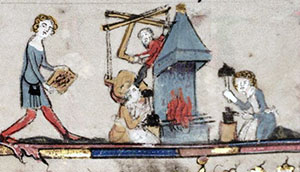 Gwyl’s association John Moore Heritage Services had involved digs at sites that included evidence of mediaeval blacksmithing. Such sites were rare. A site at Newington, between Stadhampton and Wantage, excavated 2006 – 2007 provided a limited understanding of the subject. The South Oxfordshire Archaeological Group had been involved in the project. 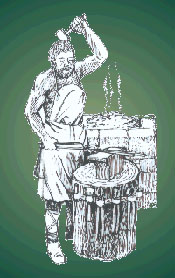 The blacksmith was considered an important person in early society. Stories grew up around them such as at Welland Smithy on the Ridgeway. Excavations at Yarnton revealed a developing industry with the production of iron objects.

Illustrations produced during the mediaeval Period provided an insight into the tools and techniques used by the blacksmith. Many of the smiths in the Middle Ages were armourers producing weapons for the Crown. Such blacksmiths achieved high status and were well paid for their skills. There were many types of specialist smiths and a variety of Guilds were formed during the period to look after their interests.

Many smiths appeared on the edge of society. An increasing population at the time created the need for more smiths although the Black Death interrupted this trend. This led to a move from a feudal economy to one in which goods were paid for. 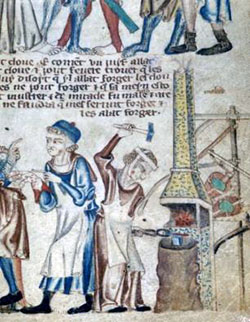 A number of blacksmithing sites excavated from the period provide archaeological evidence of hearth bottom slag, fuel ash slag and hammerscale. Much of this evidence accumulated around the anvil site within the workshop and was confirmed at the Newington site in excavations as early as 1984. Newington was a manorial holding of Canterbury and revealed a pitch tile floor and evidence of a ground level hearth. The anvil was thought to be made of wood with an iron setting. Artefacts found on the site included wet stones, knife blades and punches. High status goods included copper harness fittings and spurs. The smithy was not a totally enclosed building but thought to have a temporary wall which could be removed when necessary to allow ventilation or increased access to the building. Evidence of smithing tended to be on a micro rather than macro scale.

Documentary evidence at other sites in the country tends to confirm that smithy was leased out from manorial possessions. They became public spaces open to the community and a vital part of the local economy. They were industrial enterprises that spawned the Industrial Revolution.
Gwyl answered questions from the audience. The Meeting closed at 8:49 pm.