Bob introduced the speaker, Rebecca Wilcox who is the Community Archaeologist serving The Bernwood Forest Project in Buckinghamshire.

Becky began her presentation by outlining some statistics relating to the Project. Bernwood Forest covered over four hundred square kilometres at its greatest extent and included fifty parishes, nine of which were located in Oxfordshire. The aims of the Project were to:

Bernwood Forest dates from the pre Norman period and was established in Saxon times. The Forest reached its height in the reign of King John and Henry II. The Forest was primarily an open space and not entirely wooded. Disafforestation began as early as 1217 when purlieu parishes such as Arncott and Piddington were formed. The Forest served as its own administrative centre. The word Forest derives from the Latin foris meaning everything outdoors.

Within the forest boundary animals of the hunt, including red deer, fallow deer, roe deer and wild pig, collectively called venison, were protected for use by the King. Rabbits were granted rights of warren and all animals enjoyed the first grazing rights. Punishments for poaching were harsh with the crime of trespass against the venison carrying the penalty of death or mutilation in earlier times and the payment of heavy fines in later periods. The Boarstall Cartulary (1444-46) depicts Edward the Confessor granting the position of Chief Forester of Bernwood to one Nigel the Forester, who had slain a large boar for the King. It was within the King’s gift to award venison as gifts to those he favoured. No trees could be cut down without the King’s permission and crops could not be fenced to protect them from deer. Henry 11 laid down the formal Forest Law in a written form at ‘The Assize of Woodstock’ in 1184. 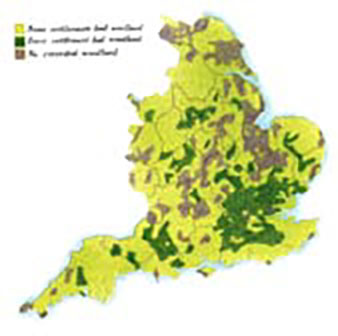 The Bernwood Forest Project area is rich in archaeology with fine examples of ridge and furrow topography, medieval buildings and religious establishments e.g: Boarstall Tower and Chetwode Priory. Numerous villages and small townships are included in the locality. Brill was an administrative and economic centre in the Forest where the Kings maintained an important Hunting Lodge. The Forest levied its own taxation. There are examples of certain purlieu parishes paying taxes to continue enjoying the advantages of remaining part of the Forest economy. The woodland and clay provided natural resources for the establishment of a thriving pottery industry at Brill and Boarstall. The Brill Common earthworks are still a reminder of this and also the brick making industry that provided building material in the area. Brill pottery was of an earthenware type for kitchenware products and was distributed throughout the South Midlands. It was characterised by a green glaze colour made from a lead base. 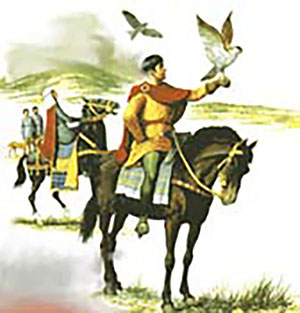 In medieval times the Forest was controlled by a hierarchy of designated officers. The Forest Court system operated at both national and local levels. The ‘justices on eyre’ was a grand assize court that met every twenty years to try all infringements of Forest Law that had been accumulated over the past quarter of a century. Swanimote and Attachment Courts met thrice annually to determine justice for lesser offences.

A number of important and rich religious centres were established within the Forest boundaries such as those at Chetwode or Studley Priory. They provided the largest buildings in the Forest and could dominate everyday life. The Catholic Church’s influence for people eating fish on Friday led to the establishment of fish ponds in the landscape. Several Grange Farms were established to provide food for the religious houses.

The Crown looked for means to increase revenue to fund the economy in later times. From 1632 disafforestation was undertaken and areas of Forest land were sold for private usage. The seven hundred years of royal protection therefore ceased.

The Bernwood Project has organised a number of events to promote its work in the locality. Forthcoming events will continue this task such as a Bernwood Exhibition on 15th October. Bob thanked Becky for her interesting talk. Becky answered questions relating to the Project at that point. The Meeting closed at 9:10 pm.