Visit to St Edburg’s Church and the Old Priory

Rev. Phillip Ball kindly provided the twenty members of the Society who attended the visit a fascinating talk about the history of St Edburg’s Church in Bicester. He set the background for the visit by outlining the advance of early Christianity in the area.

There would have been a Romano/Celtic Christian presence in the Roman town of Alchester before the foundation of Bicester. Christianity was perceived as an exotic Middle Eastern religion. There is speculation that the present Church reused the site of a pagan/Roman mausoleum as later Christian sites often located themselves at such monuments. Christianity was already known in Britain prior to St Augustan’s arrival at Canterbury. St Birinus converted the area to Christianity following the foundation of his base at Dorchester-on-Thames. Evidence of a Saxon Minster has been detected in archaeological surveys at Proctor’s Yard and at the Catholic Church car park where a boundary ditch and E. – W. aligned burials were present. John Blair in his book reviewing Anglo Saxon Oxfordshire believes the site to have been significant in Saxon times as a mother church for the area which included Stratton Audley and Launton. 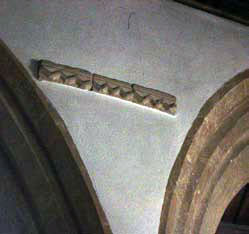 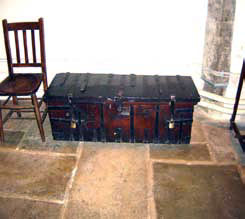 The present Church is dedicated to St Edburg, whom we know little about, although she was part of a Saxon cult of local saints which were popular at the time. She might have been a grand-daughter of Alfred the Great and daughter of Edward the Elder who took holy orders and became a nun. There are connections with Adderbury where she may have lived in holy orders and she may have been the mother of St Osgyth of Aylesbury. It is thought that she lived in the mid C7th. Her remains could well have been housed in the Parish Church before transferring to Bicester Priory.

The first priest appointed to the Church was Willielmus in 1104. The Saxon Church was replaced by a larger Norman building in C12th of which some present features remain. The building had an incomplete central tower and large arches supported this. The transepts had thick walls and the zigzag dripstones between the arches of the northern aisle imply that this was the outside wall of the Norman church built by Gilbert Bassett. The triangular headed arch in the north aisle might have been the entrance into the Church. The roof was probably barrel vaulted and there would have been small windows in the building giving limited access to light.

The north aisle was added in the C13th with large columns and pointed load bearing arches. The present font is six hundred years old but the cover is C18th. The Priory supplied priests for the Church until 1541, being its patron and was also responsible for adding the south aisle and other features of the time. Columns supporting this aisle are much thinner than those found on the northern aisle. The Augustinian order was more relaxed in its approach than many other religious orders. The south facing exterior of the Church is far more decorated as it faced the Priory. The Old Vicarage was built for the priest and a horse provided so that he could visit outlying parishes. The Parish Church provided for the needs of the townspeople and the Priory for those of visitors. The Shrine of St Edburg was moved to Stanton Harcourt following the dissolution of the Priory in C16th. The sculptures of the knights and the statue of St Edburg are thought to be relics from the Priory. The first school in the town was probably part of the Priory.

The Church took its present form in the C15th when the West Tower was built, the Central Tower removed, the roof raised and clerestory windows added. The corbels are of interest but there is no green man. The Church would have had painted wall decoration in the middle ages, a series of chapels and a rood screen was placed across the entrance to the chancel. (The stairs and entrance door to this are still visible.)

The parish was never a wealthy one. By the C18th box pews, a large pulpit and galleries had been added. The Great Storm of 1765 destroyed part of the Church leaving no medieval glass. The Church contains Memorials of various styles including a number dedicated to the Coker family. The parish had no resident vicar in C18th as it formed part of a shared living with Ambrosden and many of the priests chose to live there.

A thorough restoration of the Church was carried out in the time of Rev. John Watts in the 1860’s assisted by the architect C. Beazley. Most of what can be seen in the Church today relates to this period including the pews, window mullions and floor tiles. 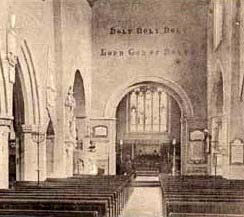 It is of great concern that Bicester’s only Grade 1 listed building has an uncertain future. There is a desperate need for urgent refurbishment including the raising of the floor to meet current legislation requirements. Other areas of concern include the installation of a new heating system, electrical work and disabled access at a cost of £750 000. These projects must be achieved in the next five years or there could be closure of the Church for health and safety and insurance reasons.

Society members moved on to view the Old Priory following the visit to the Church where the owner, Robert Parkinson, outlined the history of the second oldest inhabited dwelling in the town. The house is built on land that once formed part of the medieval Priory. John Watts excavation of the site determined that the house was built where the original hospital and guest house was located. 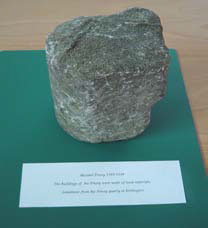 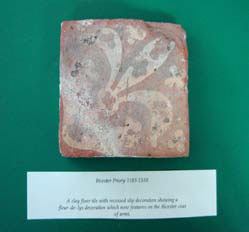 The present building is probably built from salvage materials reclaimed at the dissolution of the Priory. It could have served as a hunting lodge for the Earl of Suffolk who owned the property at that time. The walls are of oolitic limestone, similar to that quarried at Kirtlington, and was probably stone recycled from the medieval Priory buildings. The house’s corner stonework consists of dressed slabs. The original structure consisted of a two roomed building. The roof was constructed off site and assembled when the house was built. Carpenters marks used to assemble the frame correctly can be identified on the trusses. The steep pitch of the roof reveals that equilateral triangular measurements formed the basis of construction and wooden pegs held the frame together. The window frames are of carved stone and medieval in origin. Some of the glass appears to be of the period, held in place by lead framework. There is an arched doorway entrance to the rear garden of medieval origin beside the house.

The owner of the house has a number of artefacts that relate to the medieval Priory that have been recovered from his garden. These include roofing materials of Stonesfield and Enstone slates and rough clay tiles and ridge tiles. These were secured to the roof frame by wooden or bone pegs. Rounded stone cobbles have also been recovered.

The garden of The Old Priory lies within a substantial stone wall marking the limit of the medieval Priory precinct. The present garden was probably an herb or medicinal plot providing plants used in the preparation of medicines in the hospital. A dip in the centre of the garden might have been the site of a well. A cobbled medieval path leading from the side of house led to the Prior’s house within the Priory precinct.

Adjoining the property and fronting on to Priory Lane is a building used for a C17th forge and stable block that served passing trade when the road was more important in former times. Opposite the entrance to the Old Priory are two buildings used as the original Catholic Church in the town and as a home where a band of French nuns found refuge following the second Napoleonic Revolution. It is probable that this was the original site of the Priory Watermill located on the banks of the Bure mill race where the change of geology from cornbrash to oxford clay led to a slightly steeper slope that speeded up the water flow and proved beneficial in turning a waterwheel.

Bob Hessian formally thanked Rev. Phillip Ball and Robert Parkinson for their interesting and informative talks in what proved to be a very worthwhile look at the early history of two of the remaining oldest buildings in the town.