Brian posed an initial question, if Banbury and Bicester are not market towns in their present forms, what were they? The two key components of market towns were produce and livestock markets. He bemoaned the loss of characters associated with traditional markets and the fact that market traditions were in decline. Banbury received a market charter in 1148, Bicester somewhat later in 1239 at Market End and 1377 in King’s End. 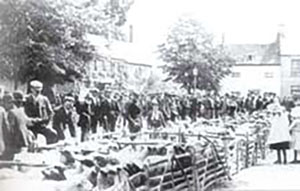 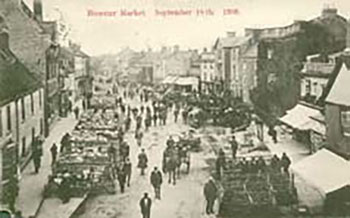 Traders at Banbury Market paid tolls for package and storage (Hire of the site and erection of stalls). The open air livestock market was traditionally held in the centre of the town. It was moved to the outskirts in the 1920’s and closed for business in 1998 having become one of the largest such markets in the country. The move from the town centre was detrimental to trade in the town as pubs, inns and retail establishments saw a decrease in their trade. Bicester livestock market saw similar relocation although there were attempts to revive the market in 1990’s following an earlier closure. Produce markets also registered a decline to a lesser degree in both Banbury and Bicester.

The early characteristics of Banbury market, echoed in Bicester, were that it was founded in a defended market space. Banbury benefited from the protection of the castle, initially a wooden structure, then stone and finally a modified Civil War fortification. Banbury developed into a C12th new town with burgage plots. The recent Castle Quay shopping centre in Banbury is built on the former castle site. Brian illustrated this part of his talk with slides depicting a number of medieval buildings, some now demolished, which made up the core of the old town. The large sheep market, the annual Christmas Fair, the cattle market in ‘Cow Fair’ (renamed Bridge Street) and the affluent South Parade were important market locations in the development of the town.

Despite the loss of aspects of the market tradition in both towns, a wealth of architectural evidence illustrates the prosperity of trade in former times. Public Houses, inns, breweries, specialist shops and Corn Exchanges remain. The trade of the Victorian and Edwardian period was captured by local photographers and showed how carriers became bus services, how town halls and other public buildings developed, the legacy of small streets and tchures within the medieval town plans and how local traders lived above their shops. The modern usage of some premises has been changed and areas, such as the Oxford Canal basin, have been regenerated.

The modern decline of the market towns of Banbury and Bicester is represented by the closure of many family run independent firms, such as Hoods, Ashmores and their replacement by national chain stores and also charity shops. There is a need to preserve older buildings, such as the former Post Office in Bicester, now the Penny Black and retain the market character of the towns. How can an alternative image be developed in current times? Do these former market towns still provide for the needs of the communities they serve?

Bob Hessian thanked the speaker for a thought provoking talk. The meeting finished at 9:05 pm.