Bob introduced the speaker, Phil Kemble, who had worked at The Bodleian Library for many years. The meeting was held at ‘The Pop In’ Centre, Bicester. Twenty eight members of the Society attended the meeting. 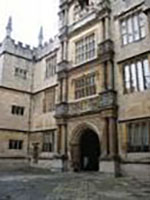 The Bodleian Library is the oldest in England dating from 1602. From the 11th century the University comprised separate Halls. There was a need for a central meeting place. The University Church of St Mary provided a focal point and c.1320 the first University Library was set up adjoining the Church. This formed the oldest surviving university building in Europe. Accommodation in the Divinity School housed the Library in the mid C15th and Duke Humfrey of Gloucester proved to be a benefactor when he donated a number of manuscript books to the Bodleian. A new room was constructed over the Divinity School to house the collection. The Library was dispersed by Reformation reformers c.1550 although some books did survive. New printed books in the gothic style began to appear, an attempt to replicate manuscript books in a modern format. 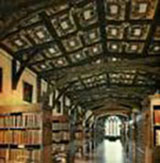 Thomas Bodley began to refurnish the Library in 1599. He was born in 1545, son of a rich, protestant merchant from Exeter. The family was forced to flee because of protestant persecution under Queen Mary. He received a European education with access to many of the great Reformation teachers of the time. He returned to England with Queen Elizabeth 1st accession to the throne and continued his education at Magdalen College. He enjoyed a distinguished diplomatic career. He retired early and requested the University to allow him to restore the Library. He resided in London but had good contacts and financial resources to enable him to carry out the task. The Library formally opened in 1602. In 1610 he formulated an agreement with the Stationers Company to receive a copy of any book registered on request. Thomas Bodley died in 1613. Work on the Library was continued by Sir Henry Savile. The main problem was that the Library didn’t have lighting so opening hours were restricted.

The Radcliffe Library was opened in 1749. Gas lighting was introduced in the 1830s. The library was acquiring books on a grand scale in the 1850s and underground storage for over a million books was constructed with a link to the Bodleian.

The Library has developed since this time. It now consists of a number of centres around the University offering research libraries and a valuable international resource. Future plans include the building of a new large book depository at Osney.