A joint meeting with Launton Historical Society. The meeting took place at Launton Playing Fields Hall. A good attendance of nearly seventy members of both Societies attended the talk.

Steve Griffiths was introduced. He was a diver and archaeologist who had worked on the Mary Rose site for many years. He outlined the contents of his talk and displayed a number of the artefacts and resources that he had brought with him.

Steve introduced his topic by discussing the diving equipment he used. The whole kit weighed 70lbs approximately and cost in excess of £1500. The cost of the excavation was much more than if it had been a land based study. Archaeology underwater in a British coastal site suffers from distorted views and disappearance of colours. There was an initial survey of the site following research from more traditional sources. Materials needed considerable conservation once they had been recovered. Over 19000 items have been raised from the site of which 4000 have been conserved. Much work involved putting the finds in to context. 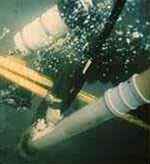 The archaeological evidence shows differences from contemporary pictures of the vessel. The wreck has had recent excavation on it as the Navy have to dredge new approach channels to Portsmouth to enable large warships to enter the harbour.