The Meeting was held at The Pop-In Centre, Crown Walk, Bicester. Thirty nine members and guests attended the Meeting. Bob introduced the Speaker, local historian, Malcolm Graham, who had published a book, ‘Oxfordshire at School’ in 1996.

Much of the talk celebrated the work of Percy Elford, Oxfordshire’s first County Education Officer, who assembled a collection of early school photographs from 1902 onwards. He was a pioneering photographer and recorded visits he made to county schools in an early car during his tenure of office. His labours formed a data base of information, maps and plans valuable to present historians. His records remained the prime source of information relating to county schools until the 1970s. The photographs and related materials were passed to The Oxfordshire Records Office twenty years ago providing some twenty thousand prints of buildings and educational activities taking place in the early C20th. The material is being digitised and will be available on internet sites when this has been completed. 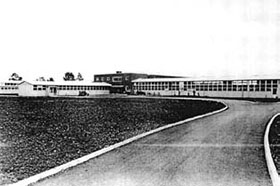 Elford inherited a cocktail of school developments that had taken place in Oxfordshire over the centuries. Buller’s prints, dating back to 1820, illustrate some of the earliest schools such as those at Ewelme (1437) and Lord William’s at Thame (1555). These had developed from medieval origins as had Bampton (1600). Banbury Bluecoats School was based above the town jail.

There was a scatter of Charitable Schools and Sunday Schools established by the early 1800s. Education for the broader mass of the population began to develop with the founding of the British & Foreign School's Society in 1808. The National School's Society, backed by wealthy landowners, promoted education for the poor from 1811. Faith schools were established in many parishes. Few Oxfordshire parishes were without schools in some form by the 1830s. The Roman Catholic School in Hethe was founded in 1860.

Forster’s Education Act in 1870 introduced compulsory education for the early years. Board Schools were established to supplement the existing school stock. These were rare in rural areas although a few were built as at Tetsworth. Many schools were of a simple design and built of local materials. There was gender segregation of pupils and playgrounds. Different teaching strategies were employed for teaching groups. Most classes had a bleak environment with few visual aids to stimulate development. Staff were paid by pupil results achieved until the 1890s. Fees were often charged until 1891. Education became increasingly child centred from this point.

Examples of various educational establishments across the county were shown during the talk including those relating to school staff and children’s photographs illustrating rural poverty. There was often poor attendance by pupils during important events such as at harvest. Medals were awarded to pupils with good attendance records.

Malcolm answered questions at the end of his talk. The meeting closed at 8:37 pm.