The Oxfordshire Landscape in the Twentieth Century

The Meeting was held at The Pop-In Centre, Crown Walk, Bicester. Present were fifty one members and eight guests. Bob introduced the speaker, Trevor Rowley, who provided an excellent illustrated talk.

Trevor described an early interest in landscape history. He had been a student of W.G. Hoskins who had written ‘The Making of the English Landscape’ in 1955. Each generation makes a contribution to the landscape and changes certain facets. Hoskins advocated the merits of landscapes until the beginning of the 20th century. Trevor wished to take this study forward and analyse the changes wrought over the last one hundred years. Why was the landscape as it is today? What were the processes behind the changes taking place?

At the beginning of the 20th century the landscape in Oxfordshire was characterised by a patchwork of fields, villages and little industry. Urban expansion, communications infrastructure and industry now imprint on the rural idle. The internal combustion engine transformed the scene. 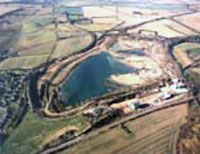 Agriculture: This was little different to the middle ages in 1900. There was increasing pressure to cultivate land at the expense of pasture. The amalgamation of small fields to produce large areas suitable for mechanised farming has been important. Hedgerows have disappeared, especially following the 1960s. There has been a diversification of agricultural practices with development of ‘farm theme experiences’.

Rural Life: In 1900 villages were closely linked to the landscape. There was no commuting, except in the London area. The population worked close to where they lived. Large estates were common. The purpose of the estates has often changed during the 20th century e.g. Middleton Stoney.

Railways: Many were closed in the mid-20th century as roads became more important.

Townscapes: The modern townscape is similar in many urban centres, lacking individuality. Towns developed rapidly in regions served by the rail network in the 1920s and 30s. This period saw the largest period of urban growth despite the depression. There was a reaction to the unplanned development by CPRE and since 1945 a regime of ‘Town & Country Planning’ legislation has been enforced to prevent unplanned development.

Quarrying: Extraction of raw materials has increased in scale in the last century. Since 1980 the extractors have been required to back fill quarries and pits.

Airfields: Until the 1930s airfields mainly had grass runways. The Second World War saw 400 new airfields, many with concrete runways. This changed the landscape considerably with large areas taken out of agricultural production.

Motorcars: Cars have enjoyed increasing popularity. Early roads were unmade but many were later metalled. There were two million cars pre 1939 and today there are well over thirty million. The motorway network has seen an upgrade of the road system. We see much of the landscape as narrow bands from roadways. Many areas of the countryside are less visited today as a result.

Power: There has been a spread of energy supply. Pylons are a landscape feature. Industry is not linked to power supply and can move away from power source locations into industrial parks.

Houses: There has been pressure to build more homes with the changes in demographic distribution of the population. Small towns have expanded with new housing estates. Oxford is protected by a green belt. Small towns have experienced a ten fold increase in size. Oxford has struggled to adapt to modern pressures with traffic problems and lack of affordable housing.