The meeting took place at the Clifton Centre, Ashdene Road, Bicester and was attended by 45 members and 4 visitors.

Many thousands of agricultural labourers and craftsmen emigrated to Australia, New Zealand, America, Brazil and the Cape of Good Hope in the 1800s. Our speaker, Shaun Morley, outlined the reasons, both enforced and voluntary, for emigration from Oxfordshire during the 19th century. These included: 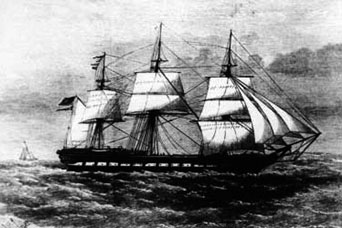 Transportation – after the American War of Independence, Australia became the principal destination for convicts, with the first fleet sailing to eastern Australia (Port Jackson, now Sydney) in 1787. This continued until 1840. Convicts were sent to Van Dieman’s Land (Tasmania) from 1803 to 1853 and to Moreton Bay (Brisbane) from 1824. Convict transportation officially ended in 1868.

Shaun detailed the example of the Bowerman brothers from Charlbury all of whom were transported to Van Dieman’s Land by 1816 and subsequently hanged for crimes committed whilst there.

Assisted Emigration under the Poor Law – under the Poor Law Act 1834, parishes could obtain loans from the Poor Law Union to pay for poor people to move abroad. Disparagingly referred to as ‘shovelling out the poor’, it reduced the burden of paupers on the rates. This was discontinued after the Cataragui disaster in 1845. This Canadian ship bound for Melbourne was wrecked in Bass Strait off King Island with the loss of all passengers, which included ninety-eight from Oxfordshire.

Emigration to Brazil – an effort to encourage 250,000 agricultural labourers to move to the country to farm its interior resulted in 500 men and families from Oxfordshire moving there by 1873. Conditions were not as promised and many suffered great hardship, necessitating the British government’s intervention. Survivors were taken to the USA.

Emigration to New Zealand – this began in 1840, when some free passages were available. Assisted emigration started in 1871 and many agricultural labourers were encouraged to go by the Agricultural Labourers Union. The Otmoor and Wychwood areas sent significant numbers to New Zealand and the lack of men to work the fields in these districts was still being felt many years later. The Cospatrick, sailing out of Gravesend, caught fire off the Cape of Good Hope with the loss of all but three of its passengers and crew. Those who perished included seventeen members of an extended family from Shipton-under-Wychwood. This tragedy brought an end to the Agricultural Labourers Union’s sponsorship of emigration.