Although focussing on the Home Front in World War II, Martin Way started his talk by mentioning the Home Front in WW1 when the First Aid Nursing Yeomanry Corps (F.A.N.Y.) (and looked upon by some as “First Aiders on horseback”!) offered their services and expertise to the War Office. However, British military opinion was still that the Front was no place for a woman: “There are enough nurses to attend to the Army. Amateurs will be neither wanted nor welcomed, either as soldiers or nurses.” A chance meeting on a train by one of the FANY organisers with a Belgian minister lead them to utilised by the Belgian army as soon as war broke out. It was not until 1916 when the British accepted their presence on the Front.

Gas had been used in WW1, and at the beginning of WW2 there was great concern that it might be used on civilians. Martin brought along various examples of the masks that were distributed to both adults and children.

The "Local Defence Volunteers" or LDV was a defence organisation of the British Army during the Second World War. It consisted of volunteers who were ineligible for military service. Churchill didn’t like the name and it became known as the Home Guard. Initially it comprised mostly of young men waiting to be called up. Once conscription took place then it became an army of older men – too old to serve in the regular army and hence the name “Dad’s Army”. Women were not allowed! Locally, the Commander of the Ox. & Bucks Light Infantry detested the Home Guard.

Concerned that in any future war there would be large-scale bombing of the British civilian population, an Air Raid Wardens' Service was created in 1937. By the outbreak of war there were more than 1.5 million in the ARP (Air Raid Precautions), or Civil Defence as it was later re-named.

A small percentage of ARP wardens were full-time and were paid a salary, but most were part-time volunteers who carried out their ARP duties as well as full-time jobs. 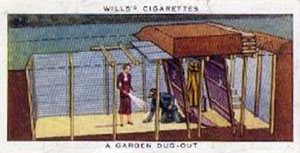 Teaching civilian defence techniques was important. Wills Cigarettes quickly brought out a set of cigarette cards depicting various subjects as to how the public could respond or learn. 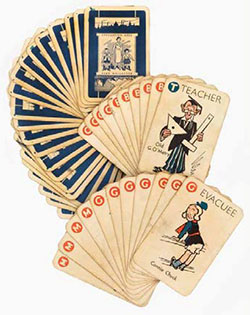 Women and children were moved out of cities and towns and underground shelters (communal and family) were built as places of safety for the public during air-raids. Many hours were spent in these shelters and also in the darkness of their own homes during the black-out. War-time board or card games were developed, often based on a current game – for example “Vacuation” was a card game based on “Happy Families”

But the war brought on shortages, hence rationing of food, clothes, petrol and sweets, creating a national culture of ingenuity, austerity and making-do. We were reminded that recycling is not a new phenomenon but was a necessity during the war. 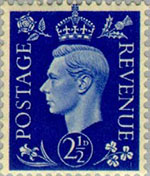 The dark colours of the King George VI definitive stamps, introduced in 1937 were reduced to a much paler colour during 1941-42 in order to save on the production of expensive coloured printing inks.

Even the old green pound note had its colour changed to blue to reduce the use of the more expensive green dye - and along with a metal strip inserted into the paper, these measures helped to combat German counterfeiting.

Martin had brought along a range of other “war items” and the meeting finished with the members being allowed to browse.