Travelling in the Middle Ages

Dr Rowena Archer gave us an interesting insight into ‘Travelling in the Middle Ages’. Rowena immediately dispelled the myth that people didn’t travel in the Middle Ages: they did, and in quite considerable numbers, too. A surprising fact since there weren’t any real maps, roads weren’t properly maintained, and there were very limited modes of transport. In fact in 1096, a hundred thousand people from France, Germany, and Italy made the mass pilgrimage by foot to the Holy Land. As today, roadworks were the bane of people’s lives. The maintenance of roads was chiefly the responsibility of the locality, which involved endless legislation to keep roads open and in a decent state. Rowena cited an Aylesbury miller who dispatched his servants to dig clay from a nearby highway, to help repair his property (apparently the highway was the only place he could get the clay). This extensive digging left a massive hole/pit in the road, which then became flooded. One evening a glover with his cart travelled along the road, fell into the pit and drowned. Amazingly, the miller was not prosecuted, since it was deemed that he was entitled to obtain the clay for the maintenance of his property.

Maintaining roads was looked upon as a charity, with people leaving money for this purpose in their wills. Bridges were important, but again depended heavily on charity for their upkeep. ‘Pontage’ was the medieval toll levied for the building or repair of bridges. Medieval bridges of note mentioned were: Dee Bridge, Chester C13th; Moulton Bridge, Suffolk C15th; Stopham Bridge, Sussex C14th; and Triangle Bridge, Crowland C16th. Bridges also attracted strong religious associations, and it wasn’t uncommon for some bridges to incorporate their own chapels. These chapels were available for the spiritual needs of travellers, who would give thanks for their safe arrival in a town after a long and difficult journey. Two surviving examples of bridges with chapels in the UK are located in Rotherham and Wakefield. In addition, Rowena mentioned two notable French medieval bridges, famous for their great spans of arches: Avignon (22 arches) and Pont St Espirit (25 arches) (pictured). 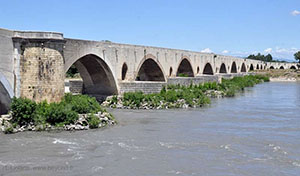 With an absence of maps to direct them, people had to rely on asking for directions on their journeys. The few maps that did exist concentrated almost exclusively on the pilgrimage sites, with Jerusalem shown at the centre. Almost everybody in the Middle Ages had to travel for some purpose. The greatest journeys were made by people on pilgrimages, visiting shrines. However, merchants, students, noblemen, servants, anybody needing to get from A to B, would have been travelling around the countryside and towns. On roads, most people walked or rode on horseback. Carts would have had iron wheels, but since there was no cushioning in carts, this mode of transport would have been very uncomfortable with the constant ruts and potholes encountered. Walking 20-25 miles a day would have been a good average in medieval times, and journeys would have been greatly helped by the state of the moon. Also, since there was no policing of the roads, travellers were often prey to robbers and gangs. Legislation was introduced to include wide verges on new roads, so that travellers were less vulnerable to such attacks.

Travel across water in the Middle Ages also uncovered another surprising fact: William the Conqueror travelled across the Channel on seventeen separate occasions! The preparations for these journeys as well as the journeys themselves are captured in intricate detail on the Bayeux Tapestry. Indeed, the Tapestry clearly illustrates the transportation of horses in boats across the Channel. For ordinary travellers, people could take ferries across the Channel. Some journeys across the Channel ended disastrously. In 1120, Henry I lost his son and heir-apparent, William Adelin, when his ship sank near the Normandy coast and he was drowned, along with many other ‘people of consequence’ of this time. William Adelin’s death had catastrophic effects on the succession to the throne, resulting in the period of history called ‘the Anarchy’ with Matilda (Henry I’s second daughter) and her battles with Stephen.

Finally, we learned that all-inclusive holidays are not a modern concept. It appears the Venetians of the Middle Ages can claim this initiative. They organised ‘one-price-covers-everything’ pilgrimages, which included the costs of the journey, the berth, the horses, the donkeys, and all food. What’s more, they offered a choice of different departure dates. 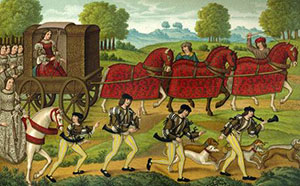 Chairman, Bob Hessian, thanked Rowena for her revealing and extremely interesting talk on this aspect of life in the Middle Ages.