Local Customs in the Bicester Area

The Meeting was held at St Edburg’s Church Hall, Bicester. Seventy three members and three guests were present at the meeting. Pete Chivers introduced the speaker, Pam Chivers, whose talk related to the customs and folklore of the Bicester area and its links with wider county traditions.

The speaker defined customs as a way of behaving or acting. A tradition was a custom, opinion or belief handed down from one generation to another both orally or by practice. Customs brought people together and helped define their place in a community. It helped to provide a sense of continuity between the generations. Customs could involve merry-making, drunkenness, luck or good fortune, a degree of punishment and enjoyment for the lower orders. Customs helped to define a calendar of events and provided entertainment for the community.

Evidence for the historical origins of local customs is provided by White Kennett, Dunkin and Blomfield. Additional material was compiled by Miss Dannatt in more recent times. An oral tradition supplied by local residents at the time enhanced our knowledge of annual customs and events. The farming year was particularly important in rural Oxfordshire with a cycle of planting, growing, reaping and resting.

The spring time was noted for Plough Monday, Valentines, Shrove Tuesday, Lent and Easter. Ploughs were blessed and valentine cards exchanged. An interesting custom of throwing sticks at cocks evolved which possibly led to the development of the Aunt Sally tradition in the county. Walking on the church roof was also a local practise at Shrovetide. Common money was awarded at Hethe during Lent and Easter lifting was traditional to mark celebrations at Eastertide.

The summer featured May Day, Village Feast and meadow mowing activities. Maypoles and individual village traditions evolved to mark this important time in the agricultural calendar. Box crosses and flower garlands were displayed in Charlton- on-Otmoor Church. The Lord and Lady of May appeared at Lower Heyford. Oak Apple Day was celebrated at Marsh Gibbon and Lamb Ale at Kirtlington. Lot meadow mowing took place at Yarnton and Wendlebury.

The autumn celebrated the harvest with Harvest Home and agricultural fairs and feasts. Bicester Sheep Fairs were held at King’s End until 1909. Hiring Fairs in Bicester Market Square enabled labourers to seek employment for the following year.

In recent years there has been a revival of local traditions and the introduction of new customs such as the annual Carnival, military parades and the Christmas Lights switch on. Health and safety legislation makes it difficult to maintain customs in present times. 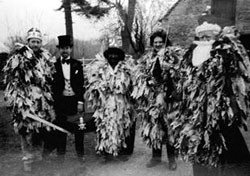 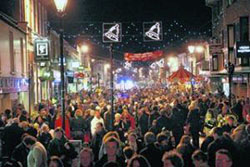 Pam answered questions at the completion of her talk. The Meeting closed at 9:16 pm.