The Meeting was held at St Edburg’s Church Hall, Bicester. Sixty three members and seven guests were present at the meeting. Bob Hessian conducted the Annual General Meeting of the Society before introducing the speaker, Pete Chivers, who talked about ‘The Otmoor Riots 1830s’. 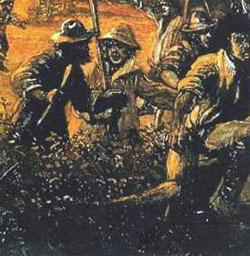 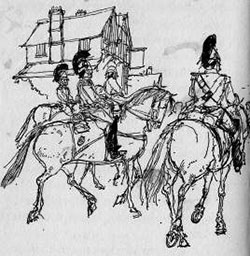 Pete initially described the characteristics of the Otmoor area. It remains a wild and largely unspoilt part of rural Oxfordshire. It was celebrated in literature, poetry and music. The ‘Seven Towns of Otmoor’ comprised local villages surrounding the moor. A rural economy predominated at the time of the riots but there was a strong representation of craftsmen and tradesmen who supported the actions of the rioters.

Attempts to enclose what in effect was an open field landscape had begun as early as 1788. Resistance from the Moor men and disagreements between the landowners meant that land around Charlton-on-Otmoor wasn’t enclosed until well after the riots. Local residents had maintained closely guarded common rights to use the moor for many centuries. Enclosure would mean that these rights were lost and the gentry, Oxford Colleges and local clergy would be awarded the majority of the land. Many of the landowners were absent from the area. Events came to a head in late August and early September 1830 when significant destruction of hedges, fencing, ditches and gateways took place on the moor. Bands of insurgents would disguise themselves before setting out to carry out their unlawful tasks. The local community supported the actions of these groups and funds were provided for food and drink to fortify them before their activities on the moor at local inns.

The local landowners were concerned that events were spiralling out of control when violence erupted and further property was destroyed. The militia was called out to quell the rioting. The rioters became far bolder with a thousand men, women and children perambulating around the moor. The cry of ‘Otmoor for Ever!’ was frequently heard. The ‘Riot Act’ was read by the local magistrates and sixty six rioters were arrested by the militia and taken to Islip to appear before the magistrate. Forty four of the prisoners were chosen to be taken to Oxford for imprisonment. An inadequate detachment of cavalry was detailed to guard the prisoners on their journey. News of the arrests had reached Oxford prior to the arrival of the detail. St Giles Fair was being held at the time. Agitators incited the crowds. The soldiers were pelted with stones, bricks and timber. The prisoners were allowed to escape. Many were recaptured soon afterwards.

Unrest continued on the moor for many years following the St Giles Fair incident. A police force was sent to maintain order on Otmoor. They enjoyed limited success. The situation began to improve by 1835 and the rioters lost local support for their cause. The enclosure of the moor was never totally successful. Today it has reverted to a wetland habitat with limited agricultural activity taking place. 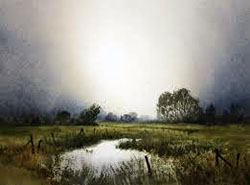 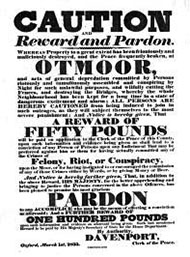 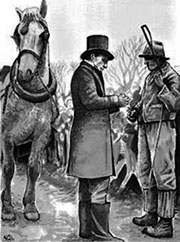 Pete answered questions at the completion of his talk. The Meeting closed at 9:34 pm.