The Meeting was held at St Edburg’s Church Hall, Bicester. Fifty four members and four guests were present at the meeting. Bob Hessian introduced Pete Chivers who outlined the reasons for emigration from the area in the period under consideration and the effect it had on the community. 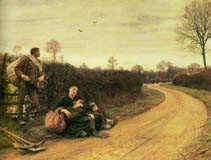 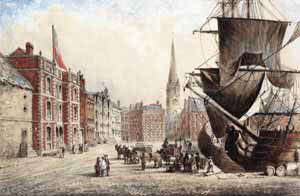 Emigration from the area took place for a number of reasons that included economic, political, social and religious reasons. There were local factors that encouraged residents to emigrate as well as advantages that benefited would be emigrants in seeking a new life abroad.

The 1630’s saw difficult religious conditions for a number of families living in the Bicester area. Puritan families sought religious freedom in the New World to escape persecution at home. The Sumner family were amongst the earliest settlers in Dorchester, Massachusetts. John Sumner was born in Bicester in 1604. The family were settled in the colony by 1636 where John Sumner rose to prominence and became a leading figure in the community before his death in 1688. Hardships, including Indian Wars, were endured as the settlement of Dorchester grew to become part of modern day Boston. John Sumner’s decedents were flourish and achieve high office in the political and military history of the United States.

A chance find of Parish Vestry records at St Edburg’s Church in the 1950’s threw light upon an emigration scheme organised in May 1830 in the town. In order to solve the problem of the burden of paupers on the Parish Poor Relief Rates members of the Vestry Committee visited King’s Sutton to learn about a scheme that had been organised to encourage a number of families to emigrate to America. On their return a similar scheme was proposed at Bicester and 71 adults and 40 children were selected to take part in the project at a cost to the public rate of approximately £1000.00. The scheme, however, was a genuine attempt to improve the lot of the families and passage, clothing and finance was provided to enable the emigrants to succeed with their new life abroad. The party travelled to Liverpool in five days by cart and boarded a ship called ‘The Warren’ to undertake the voyage. Little information is available following their departure as to how successful they were in settling in the New York area. Some would be emigrants returned to Bicester and were subsequently recorded as depending on the Parish Poor rate once again. The father of one family who didn’t make the voyage was eventually transported for penal service in Australia a few years later following the death of his wife in the Cholera outbreak of 1832.

Emigration could prove a hazardous activity in the nineteenth century. An emigrant ship, ‘The Cataraqui’ foundered off the coast of Australia on 4th August 1845. On board were a number of local people, including many from Tackley and the surrounding villages. Over three hundred passengers and crew lost their life in the disaster.

Local residents continued to emigrate to far flung corners of the world throughout the decades following those previously described and became successful farmers and businessmen in their chosen countries. The American entertainers the Osmond family can trace their ancestors back to their Bicester roots.

Pete answered questions at the completion of his talk. The evening concluded with a raffle and refreshments. The Meeting closed at 9:56 pm.