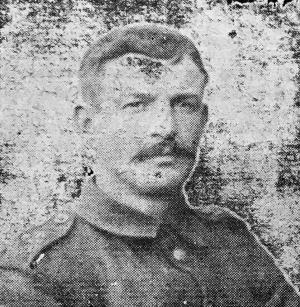 "Private Arthur Coppock, who, as we reported last week, was seriously wounded in the head on Tuesday week. A wire was received by his wife on Sunday last to say that he had died of wounds on the preceding day. Pte. Coppock was a member of the Oxfordshire and Buckinghamshire Light Infantry; on the outbreak of war, being at that time a National Reservist, he volunteered for active service at the first parade of veterans. He was at once sent for training, but is a very short time was drafted to the front.
On the first receipt of the news of his death it was thought that possibly a mistake had been made, as the Private’s number was apparently quoted wrongly. Enquiries were therefore made by a friend, but a reply was received from Major F. Amesbury, stating that he was sorry to say there was no mistake; there was certainly some confusion in numbers, but this was accounted for by the fact that Pte. Coppock’s number had been changed, although he may not have been aware of it. A postcard was received by Mrs Coppock on Sunday morning (the same day on which she received notification of her husband’s death) saying: – “Dear wife, just a line to let you know I have had a very good day to-day. I have not much pain, but it is a slow job however; from your loving husband, Arthur.” This was not written by Pte. Coppock, but evidently by a hospital nurse at his dictation.
Pte. Coppock leaves six small children, one of whom was only a month old when he was “called away” to do service for his country. Since he has been at the front he has seen more than his share of the fighting, as is evidenced by the many mentions of the gallant work of the 2nd Oxon and Bucks.
Most cheerful and interesting letters have been received from him, many of which we have published. A sentence typical of the British soldier (or sailor) occurred in one of his letters recently to his brother, which was not published with the rest of the letter. It ran – "They tell me mother and my wife worry a great deal, so I just write them some long cheerful letters and tell them everything is all right, but of course it is not very grand." Despite the latter knowledge, which bore more significance than words could express, no word of complaint was written by Pte. Coppock, who has earned his place in the list of Bicester Heroes." Bicester Advertiser 28/05/1915