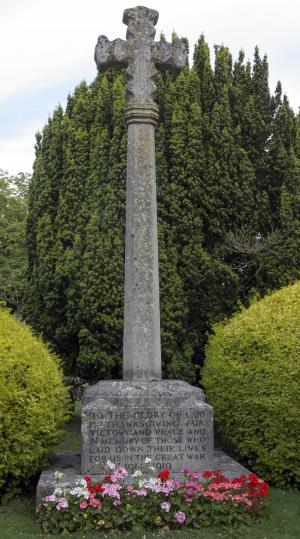 Son of Charles & Mary Cox, of Stratton Audley. Commonly known as Jack. Listed on the 1911 census as a "whipper in" for the Bicester Hunt.

"A well-known follower of the Bicester Hounds writes: – “The name of ‘Jack Cox,’ first whipper-in to the Bicester Hounds, is, I regret to hear, added to the long list of those in this town and neighbourhood who have gallantly given their lives for their country. News came to his father on Thursday (yesterday) morning that he had fallen in action in France. He was an excellent first whip, and his bright and cheerful manner made him very popular in the hunting field and elsewhere. He leaves a widow and two children, for whom the greatest sympathy will be felt, as well as for his father (who has so long and successfully hunted the Bicester Hounds) and for his brothers and sisters.
The news is of a semi-official character, having been received from Tpr. Cox’s commanding officer, who stated that he was killed instantly by shrapnel fire on 4th March.
Tpr. Cox had not long joined his regiment – the Scots Greys – and was drafted to the Front in December. He has died – although a sad one – a very honourable death, at the age of about twenty five years." Bicester Herald 09/03/1917

"A memorial service to Trooper 'Jack' Cox will be held in Stratton Audley Church on Sunday at three o’clock." Bicester Herald 16/03/1917

"The articles carried by Tpr. 'Jack' Cox, late first whip to the Bicester Hounds, which have been returned to his home, include a hunting horn and cap badge. It will be remembered he was killed on March 4th when serving with the Scots Greys on the Western Front." Bicester Herald 13/04/1917