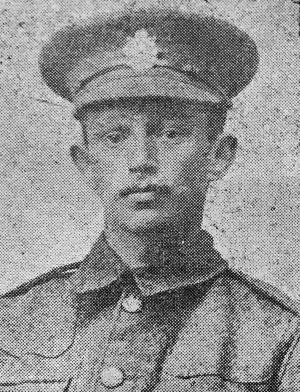 "Mr and Mrs G. Ashmore, of the Garth, have received intimation that their elder son, Henry, has died as the result of wounds received in action. Private Ashmore was foreman at Underley Hall Gardens (Lord Henry Bentrick), Kirkby Lonsdale, Westmoreland. He volunteered for the army on September 1st, 1914, and joined the A. Company 7th Border Regiment.
The first news was received by deceased’s wife in a letter from the Company Quarter-Master Sergt. of deceased’s company, who stated "He went into action with the regiment on the 1st August, and all went well with him until about 5.30 on the morning of the 6th, when he was busy issuing the daily rations to the men, and a shell burst very near him, and he was seriously wounded. He was at once taken to the dressing station, where he died very soon after his arrival. This occurred at Deville Wood. He was buried at Banifra Wood on the 7th. All have felt it very keenly here, for he was always with us and his loss is heavily felt by the officers, NCOs and men of his company, for he was respected by all. I am forwarding his ring with some photos which he left with me before he went into action. The Company Sergt.-Major will also be writing to you. He said he thought it was his duty to do so."
Private Ashmore was 31 years of age, and had only been married a few months.
Mr and Mrs Ashmore and daughter sincerely thank all those who have been so kindly sympathetic in their loss." Bicester Advertiser 25/08/1916