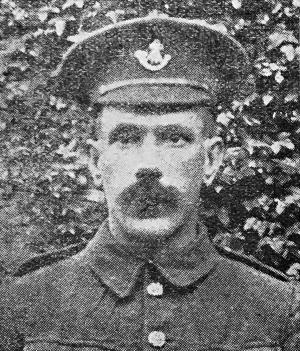 "Mrs Dean, of 5 Hadland’s Yard, has received official information to the effect that her husband, Private J. Dean (16577), 5th Oxford and Bucks Light Infantry, has been missing since the engagement of September 25th. The last letter received by Mrs Dean from her husband was dated 20th September. Private Dean enlisted on December 1st, 1914, and proceeded on active service last May since when he has regularly corresponded with his wife. In pre-war times Dean was a prominent footballer as goal keeper for the Bicester XI., and was a member of the team which won the Junior trophy." Bicester Advertiser 15/10/1915

"Mrs J. Dean, of Hadland’s-yard, has now received news concerning her husband, Pte. Jim Dean, O.B.L.I., who was reported missing at the battle of Loos. This takes the form of an official notice, which is to the effect that it can now only be concluded that Pte. Dean is dead, and the King’s sympathy is enclosed. Pte. Dean was 38 years of age, and leaves a widow and family of young children, with whom the greatest of sympathy is felt." Bicester Herald 08/09/1916