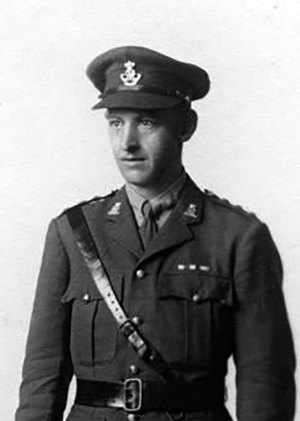 "It is with sincere regret that we have to record the death in France of Captain Horatio Fane, M.C., of the Oxfordshire Yeomanry, son of Captain H.G. Fane, of Bicester House. The deceased officer went to France with the Yeomanry at the commencement of the war, and had therefore seen four years of service. He had been previously wounded, and only left Bicester after sick leave on June 27th last.
A letter received by Mr Tubb this morning from Major the Hon. Arthur Villiers states that Captain Fane was badly wounded by a shell on the 10th inst. and taken to hospital. The nature of the wound, and how severe he could not say, but he believed it to be very serious, as Captain Fane was removed in a very weak condition. The official intimation received by the parents of the deceased officer stated that he died on August 11th. This is the second son that Captain H.G. Fane has lost in the war.
Captain Horatio Fane was intensely popular with both offices and men of the regiment, and was always highly spoken of by the men home on leave. In civil life his frank and open manner won for him many friends, and the town of Bicester is the poorer by so promising a career being cut short. He took an active interest in many things connected with the town, and was a member of the Urban District Council up to the time of his death. The greatest sympathy is felt for Mr and Mrs H.G. Fane in their great bereavement." Bicester Advertiser 16/08/1918