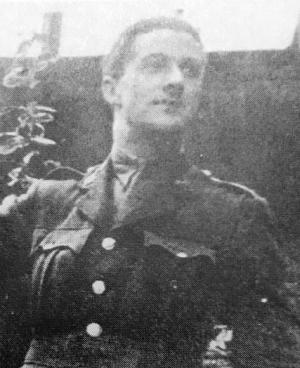 "Yet another sad duty falls to our lot this week in recording the death in action of Second-Lieutenant William H. Grimsley, only son of Mr J.W. Grimsley, of Sheep Street, Bicester, which took place on October 6th, in France.
Lieutenant Grimsley had only returned to France last month after spending nearly two years in England following an attack of trench fever contracted whilst on active service in 1916. He joined the army in July, 1915, enlisting in the Artists Rifles as a private, and subsequently gaining his commission. He was gazetted to a battalion of the Yorkshire Regiment, and proceeded to France in July, 1916. He returned to England in October of the same year and, after a considerable period in hospital, undertook valuable work at Hartlepool in performing the duties of gas instructor to a battalion. He went again to France last month, as stated, and his relatives were informed of the sad news on Saturday evening last.
Lieutenant Grimsley, who was in his twenty-seventh year, was exceedingly well known in Bicester and district, having been born in the town in 1891. As a boy he was a member of the Parish Church Choir, and when young gave promise of being a musician of more than average ability. His first red letter day was at the age of twelve, when, in the absence of the organist, Mr G. Bishop, he conducted the services at the Church, and from that time onward he made great and rapid strides in the world of music.
In 1910 he entered a competition (open to candidates from Berks, Bucks, and Oxon) at Oxford, and was successful in obtaining two first prizes for organ and piano playing. In the following year he qualified to become an Associate of the Royal College of Organists. Prior to joining the army Lieutenant Grimsley was organist and choirmaster at Chesterton Church, which position he had held with much credit to himself for several years. He was at the same time employed as a clerk in the Bursary at Queen’s College, Oxford. For some time, also, he was conductor of the Bicester Y.M.C.A. Band, and an active member of the Bicester Tennis Club.
We are sure we voice the sentiments of a great many when we extend to the relatives of the deceased officer our sympathy in their great loss." Bicester Advertiser 18/10/1918