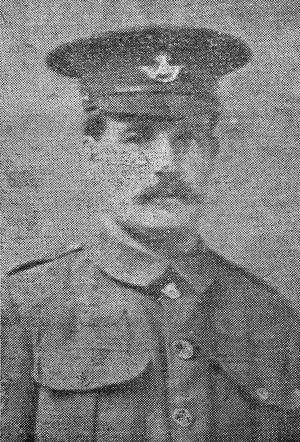 "News has been received by Mr Jonas Harris, of Buckingham-road, that his elder son, Company-Sergeant-Major Harry Harris, of the O.B.L.I. has been killed in action. No details have so far reached home the bare official announcement only having been received from the Record Office, and the date mentioned is August 24th.
Sergt.-Major Harris had formerly belonged to the Territorial Forces, and, a member of the National Reserve, was one of the first men to volunteer for service on that memorable Sunday two years ago, on the occasion of the National Reservists Parade. His undoubted abilities were soon discovered, and he received his three stripes not long after joining up.
He went to the Front in March 1915, and was wounded in September of that year, returning to the Front about the following Christmas. Soon after this he took over the temporary duties of Company-Sergeant-Major, and was killed soon after the confirmation of his appointment at the age of 30 years." Bicester Herald 15/09/1916

"Company Sergt.-Major Harry Harris is the eldest son of Mr Jonas Harris, of Town End Cottages, and is reported as having been killed in action in France. He was an old territorial and at the outbreak of war was in the National Reserve. He was the first to volunteer for active service at the church parade of the National Reserve on Sunday, August 23rd, 1914, when the first appeal was made for men, and was wounded in the earlier part of the war. He was 30 years of age, and belonged to the Oxford and Bucks Light Infantry." Bicester Advertiser 15/09/1916