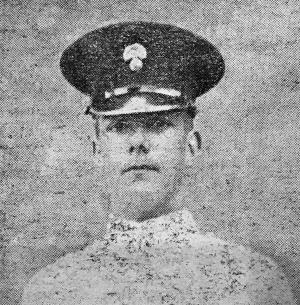 "News has been received, though not officially, of the death of Private Albert George Hawkins, of the 2nd Batt. Grenadier Guards, son of Mr William Hawkins, of Chesterton.
On April 16th he was with a party practising grenade throwing, when one exploded in his hand, thereby causing his death. He had been in the regiment a little under two years. He had seen service in several engagements, including Ypres, and in a letter to his brother a short time ago he said he was only fifty yards from the German trenches.
He had several narrow escapes, one in particular, when a bullet passed through his pocket, inflicting no personal injuries. Had the deceased lived he would have celebrated his 21st birthday on April 19th. His parents were notified of his death by Sergt. Jeacock, of the Grenadier Guards, who, in a brief letter, said he was sorry to lose such a steady, brave fellow." Bicester Advertiser 23/04/1915