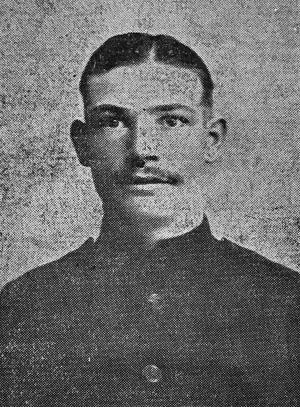 "We regret to have to inform our readers that news has been received by Mrs George Ayris from her son, Albert, to the effect that her son, Thomas, a sergeant in the Rifle Brigade, was killed in action on October 23rd, 1916.
He had previously been wounded three times - In May, 1915, then exactly a year later to the same day, and again in the following July. His wounds only necessitated him being brought to England on one occasion, and the last time that he was wounded he was so anxious to get back and help in the "big push" that he was discharged from hospital three weeks sooner than should have been the case.
The following are extracts from the letter received, dated November 4th, 1916: "Dear Mother and Father, Just a few lines to let you know that I have today received first hand particulars of my dear brother's death. I have no doubt you have been informed by the War Office before this. The grief I share with you is, I am sure, beyond words; but we must console ourselves with the knowledge that he has died for a great cause, and that others may live a peaceful life.
I have this afternoon been talking to the only man who was by him when he was killed. He was between the English and German lines receiving orders from his officer as to where he was to make a trench, when he was shot through the head by a sniper, and died without a murmur. His officer spoke of him as a great friend, having been with him ever since they went to India, and said that he was the one man he relied upon for anything; nothing was a trouble to him and he never saw danger. I know the exact spot where he is resting, and as soon as an opportunity arrives I shall visit it.
The exact date of his death was 23rd October.
I may add that Tom had been recommended for a higher post, which shows that he lived as he died - a good soldier."" Bicester Advertiser 17/11/1916