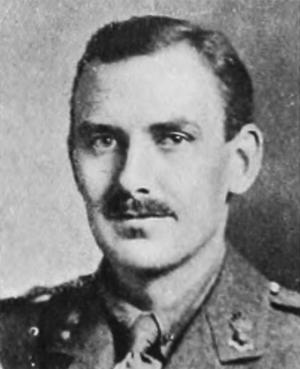 Son of Walter Heape, M.A., F.R.S, of King's End House and of 10 King's Bench Walk, Temple, by his wife Ethel, dau. of Joseph Ruston.
Born in Cambridge and educated at Parkfield, Hayward's Heath; at Repton, where he was a member of the O.T.C., and shot for his school at Bisley; he also represented his school in the team sent to Aldershot for the Public Schools competition of his year, and at Trinity College, Cambridge, where he served in the University Cavalry Corps.
He was apprenticed to Messrs. Vickers, Sheffield; joined the West Riding Territorial Royal Engineer Corps on the outbreak of war; obtained a commission in the Royal Horse Artillery in Dec. 1914, and subsequently exchanged into the Royal Field Artillery.
He served with the Expeditionary Force in France and Flanders from March 1915; took part in the operations on the Somme, and was killed in action while acting Major in command of his battery, and fighting his guns at the Battle of Arras.
His Colonel wrote: "Brian, as you know, was a great friend of mine, and we had journeyed into much danger together. You have reason to be proud of him as the bravest of brave soldiers, as brave a man as ever I have met. He had nerves of steel, and did not know what fear was; in fact, he didn't realise that there was any such thing as danger in the whole world. He was a born fighting soldier, a most capable battery commander, and during the whole time he was serving under me I never found a single fault in him, nor did I have a single complaint from him. I miss that great big, cheery fellow, with his wonderfully joyful laugh and his perfect good temper. He was the life and soul of his battery.", and a brother officer: "His death was nearly as great a blow to us as it must be to you, as we loved him as only a soldier can love a very brave and gallant officer."

"Mr and Mrs Walter Heape, of King’s-end House, have, we regret to report, received the information that their eldest son, Captain Brian M. Heape, a successful Royal Field Artillery officer, was killed in action on May 16th. He had but quite recently been promoted Captain, and had not long returned to the Front after having been through a special gunnery class in England." Bicester Herald 25/05/1917

"We much regret to announce the news of the death in action of Captain Brian Heape, of the Royal Field Artillery, which took place on the 16th inst. Captain Heape was a son of Mrs Heape, of King’s End House, and was only 24 years of age." Bicester Advertiser 25/05/1917