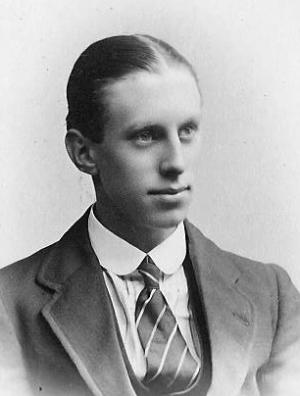 "We regret to record the death of Private Cecil Egerton Hedges, youngest son of Mr G.W. Hedges, draper, etc., of Bicester, which took place on Monday as a result of an accident which occurred some two months ago. The deceased lad, who was only 19 years of age, was serving his King and Country in France at the time and was enjoying a bathe with some more members of his regiment (the Worcesters) when, in taking a dive, he struck a comrade who was swimming beneath the water with such force as to seriously injure his spine. His parents were notified that he was dangerously ill on May 27th. On June 5th he was brought to a hospital in London, where at one time he was making satisfactory progress, but he was taken much worse on the 16th, and on the 23rd was removed to a hospital at St. Albans, where he passed away as stated.
Pte. Hedges joined the army in March 1917, enlisting in the Cyclists’ Corps attached to the Queen’s Own Oxfordshire Hussars. He was, however, transferred to the Worcesters, and went to France in April of the following year. He was in the thick of the fighting at Mount Kemmel, but came safely through and was transferred to a trench mortar battery in the Champagne district, in which district he was serving when he met with the accident which led his death.
The funeral took place yesterday (Thursday) at Bicester and was of a simple but impressive nature. The Rev. C.H. Rose, Wesleyan Minister, officiated, and there was a very large number of people present, including many connected with the Bicester Wesleyan Church, at which the deceased lad was a regular worshipper in addition to being a Sunday School teacher.
The coffin bore the inscription “No. 57380 Pte. Cecil Egerton Hedges, passed away July 15th, 1918, aged 19 years. The chief mourners were: Mr and Mrs G.W. Hedges (father and mother), Mr and Mrs W. Hedges (brother and sister-in-law), Mr Fred Hedges and Miss J. McKay (uncle and aunt), and Miss Hedges (aunt). Others present were Mr and Mrs Dixon, the Misses C. and D. James, Mr and Miss Trinder, Mr J. Richardson, the Misses E. and D. Prentice, Mrs W. Rose, Miss E. Woods, Miss Newell, Mr W. Parrott, Mrs H. Payne, Mr P. Wade, the Misses M. and D. Dixon, Mr G. Layton, Mr Mallett, Mrs T. Allen (Buckingham), etc." Bicester Advertiser 19/07/1918