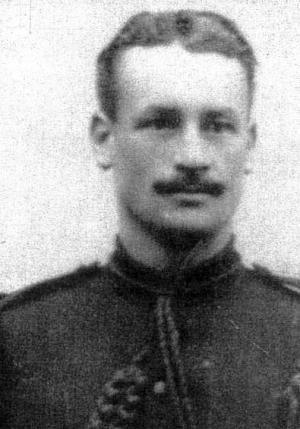 Francis Hirons married Catherine Mary Nugent, from Tipperary, in 1913 while stationed in Ireland with the 3rd Battalion of the Rifle Brigade. In the year he died his wife gave birth to a boy, Arthur Hirons.

"We have pleasure in publishing this week an excellent portrait of Francis John Hirons, aged 26, who was wounded in action at the front on August 14th serving with the Rifle Brigade and passed away four days later, deeply regretted by his officers and comrades.
He is a son of Mrs K. Parker, of 56, North Street, Bicester, and his early years were spent in the town. He first served as a seaman on H.M.S. Drake, but a sailor’s life did not suit him, and he left the Royal Navy in order to enlist with the Rifle Brigade, where he served faithfully to the day of his death. Thus from the age of 18 he has been serving his King and country. His mother, for whom the greatest sympathy is felt, speaks of him as a good son, who never caused her any anxiety.
Rifleman Hirons, prior to the outbreak of war, was stationed in Ireland, and there he married a Tipperary girl, and Mrs Hirons, with her infant child, still lives in that famous Irish town. How often must the thoughts of the gallant rifleman have been carried there as he heard his comrades singing the popular army song, “It’s a long way to Tipperary.” We are sure our many readers will unite in heartfelt and deepest sympathy to the bereaved widow and fatherless child in their irreparable loss.
Rifleman Hirons received a bullet wound in the stomach, and his case was regarded as hopeless from the first. He, however, regained consciousness towards the end and asked his chum to convey the sad intelligence to his wife, which he did." Bicester Advertiser 10/09/1915