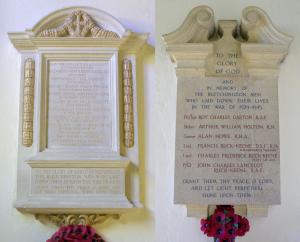 Husband of Peacie Sarah A. Bateman, of 5 Holcombe Road, Rochester.

"On Saturday the Admiralty announced that his Majesty’s torpedo-boat destroyer Eden had been sunk in the Channel the previous night, as the result of a collision. Over thirty men were saved, but we regret to notice in the casualty list of members of the crew missing and believed drowned, the name of Harvey Bateman, of Bletchingdon. Bateman, who was leading cook’s mate, was the son of Mr R. Bateman, and had seen eleven years’ service in the Navy. He was 29 years old and married." Bicester Herald 23/06/1916