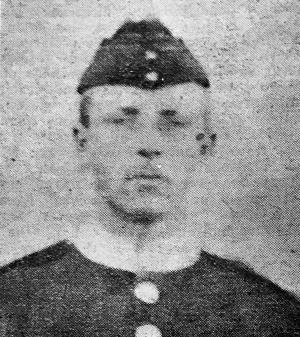 "Pts Joseph Baughan, son of Mr Jack Baughan, of St. John’s Street, Bicester, was reported killed on Thursday (yesterday) morning. He was a member of the Oxon and Bucks Light Infantry, having served in the South African War. The letter bearing the sad news was written by a comrade, who buried Pte. Baughan. It was stated that he was killed on May 16th, his death occurring probably in the same battle in which Pte. Arthur Coppock fell. He was first cousin to Pte. Coppock, and the letter, in writing home when Pte. Baughan went to the front, said it seemed quite nice to have Joe Baughan out there, as it was like someone from home.
Pte. Baughan was 33 years of age, but was unmarried. He was out of his time as a soldier, so was not called up at the general mobilisation. The patriotic spirit was still within him however, and he re-joined the forces on December 19th, 1914, ultimately landing in France on Good Friday (April 2nd, 1915). The bereaved parents have two other sons, both of whom are in the Army, and at present serving in Egypt. Mr Jack Baughan (the father) has been engaged recently in Government work at Didcot." Bicester Advertiser 28/05/1915