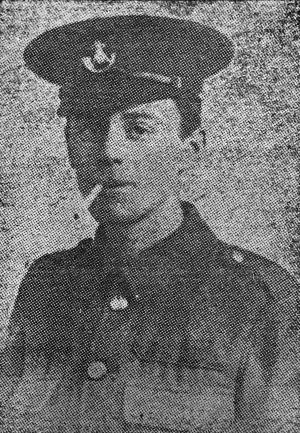 "It is with regret that we record the death of another Bicester soldier, at the Front, in the person of Private Henry Thomas Parker (Oxon and Bucks Light Infantry), the only son of Mr J. Parker, of 57 North-street. The news was received on Tuesday and was conveyed in the following letter from a Church of England chaplain: “It is my sad duty to inform you that your son, Pte. H. Parker, was killed in action early this morning (June 29) and I have buried him, along with four of his comrades, in a quiet little cemetery not far from where he was killed. I know it will be a sad blow to you, but I trust you will be comforted in your great grief by the fact that your son laid down his life for his country. God bless you in your trial.”
In a letter to his mother, received yesterday, Pte. W. Ayris (one of the fallen soldier’s comrades) writes: “Of course you will have heard the sad news of Harry Parker’s death. I was with him at the time. It was more of an accident than anything else.”
Pte. Parker was 21 years of age and enlisted Easter, 1915, going to the Front about six weeks ago. He was a former employee at the Co-Operative Stores." Bicester Herald 07/07/1916