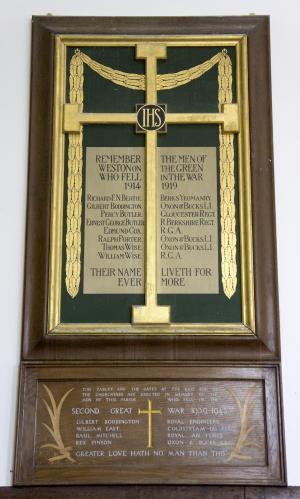 Son of Capt. Frederick Arthur & Rose Emily Bertie, of 13 Bradmore Road, Oxford. He was the last member of the family to own Weston Manor. The family had owned it since 1540, but his mother was forced to sell it for death duties.

"We regret to record the news of the death in action of Lieut. Richard Bertie, son of the Hon. Mrs Bertie, of Weston Manor, which took place on November 20th. The deceased officer who was in the Yeomanry, went to Palestine in December, 1915, at which place he met his death. The News is official, but further details are lacking." Bicester Advertiser 07/12/1917

"Lieutenant Richard Frederick Norreys Bertie, of the Berks Yeomanry, who was killed in action in Palestine on November 20th, aged 41 years, was the only son of the late Capt. Frederick Arthur Bertie, and Mrs Bertie, of Weston Manor, Bicester. He fought in “Pagets Horse” in the South African War and had the Medal. He was afterwards in the Consular Service in the Persian Gulf until 1908.
He joined the Berks Yeomanry in 1914, left for Egypt in 1915, and was wounded on August 29th, 1917, in Palestine. An account of the battle in which Lieutenant Bertie lost his life appeared in the Morning Post of Monday, 26th November.
A memorial service was held on Sunday last, at 3 o’clock, in the Parish Church, Weston-on-the-Green, conducted by the Rev. P.C. Bevan, M.A. Vicar. It consisted of the order for the Burial of the Dead, omitting the words of committal. Two hymns were sung at the service “My God, my Father while I stray” and “Peace, perfect peace in this dark world of Sin,” Lieutenant Bertie’s favourites. There were present, Mrs Bertie and her three daughters (Mrs McKee, Mrs Dashwood and Mrs Jagger), Lord and Lady Valentia, the Hon. Hilda Annesley, Mr F.W. Jones, and a large number of parishioners.
The following telegram has been received by Mrs Bertie, from Buckingham Palace “The King and Queen deeply regret the loss you and the army have sustained by the death of your son in the service of his Country. Their Majesties truly sympathise with you in your sorrow.”" Bicester Advertiser 14/12/1917