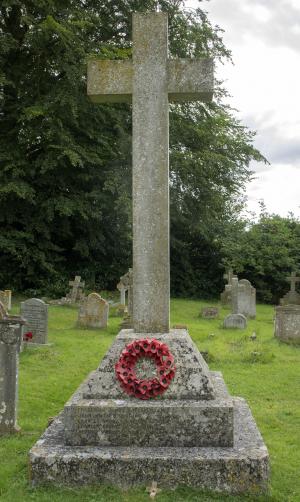 "Great concern was felt at Fringford on Tuesday when it became known that Pte. Ernest Charles Richardson had been killed in action in France, and considerable sympathy is felt with Mrs M. and Miss Richardson, who have lost respectively their only son and brother.
The sad news was conveyed to the bereaved family in a letter from Pte. Richardson’s Company Commanding Officer, who wrote to the sister to the following effect: “It is with deep regret that I convey to you the sad news of your brothers death; he was killed in action on the first of August during an attack. Our thoughts of sorrow are with you in your unfortunate bereavement.”
Pte. Richardson, who was only 21 years of age, was a member of the Royal Warwicks, which regiment he joined only about five months ago, having left for France on July 17th. In civil life he was a gardener at Cotmore.
The news, although not official, is, we are afraid, of a reliable nature." Bicester Herald 08/09/1916

"In loving memory of Ernest Charles Richardson, Private, 11th Royal Warwick Regt., dearly loved son of C. and M.A. Richardson, of Fringford, who was killed in action in France, August 13th, 1916.
Three years have passed, but still to memory dear,
Thy loving name we breathe and shed a tear;
Time cannot alter love so deep and true,
This year brings back our grief anew.
Though his loving voice is silent,
And his true heart ceased to beat;
Yes we miss his well known footsteps
And his face we used to greet.
From his sorrowing Mother." Bicester Advertiser 08/08/1919