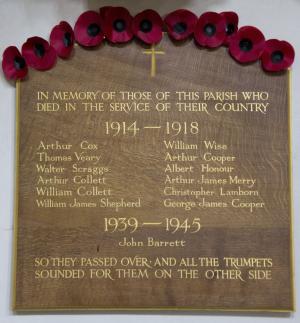 Son of William & Norah Jane Shepherd, of Charlton-on-Otmoor. Formerly with the Oxfordshire & Buckinghamshire Light Infantry (22173). Killed in action in the Battle of Flers-Courcelette.

"The sad intelligence has been received at Charlton-on-Otmoor of the death in action of Lance-Corpl. W.J. Shepherd, the only son of Mr and Mrs W. Shepherd, of Charlton-on-Otmoor. He had only entered the O.B.L.I. in the early part of this year, and was sent abroad with the 21st London County Regiment, to which he had been attached as a rifleman.
In the great advance of Sept. 15th, his battalion was ordered forward to attack a German position, and he was severely wounded. His inseparable comrade, Rfn. Powell, also of Charlton, was able, after making every effort to save him, to be with him at his death on the battlefield. The Sergt.-Major of his Company writes that Corpl. Shepherd was already a man marked out for higher things, and he was a model soldier, and a son of whose life his parents could be very proud. No more could be said, and we hope the thought of their son’s good life and honourable death may be some consolation to his sorrowing parents." Bicester Herald 16/10/1916