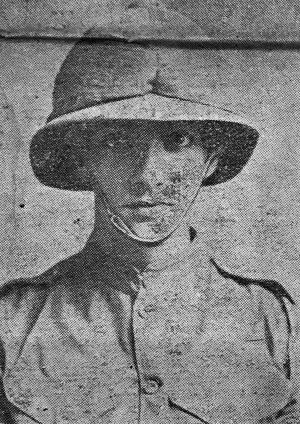 Lost at sea, drowned on the Royal Edward. Son of William & Jane Alldridge. Father died in 1892, mother in 1909.
The 1901 census shows him living in Victoria Road with his widowed mother and elder brother. By the 1911 census he had moved to Thame to work as a grocery store manager.

“We regret to record the death of Lance-Corporal W. J. Alldridge, a well-known bicester man, who was lost by the sinking of the transport “Royal Edward” in the Aegean Sea.
Lance-corporal alldridge was employed at the International Stores for some years until he was promoted to another place previous to his enlistment. It will be remembered that he took an active interest in the Church Lads Brigade in Bicester, and served in it as an officer. He was well known locally and highly esteemed by all who knew him for his good qualities. The news of his death came as a shock to his numerous acquaintances.
He responded to the parliamentary appeal at the beginning of the war and was drafted to the R.A.M.C., in which he became a non-commissioned officer. He sailed from Plymouth and his last letter reporting himself was written from the ill-fated ship at sea.
He was 26 years of age. His brother, Mr G. Alldridge, of Alchester Terrace, is a well-known local musician. He also leaves two sisters who deeply mourn his loss.” Bicester Advertiser 10/09/1915